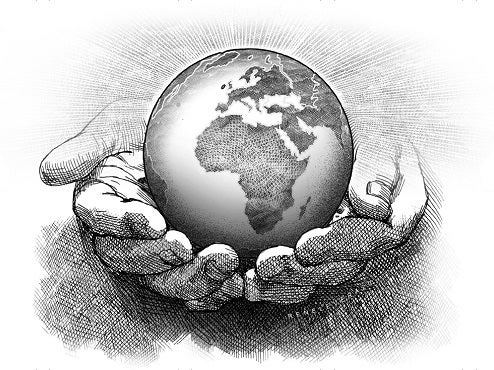 Always, when I yearn for religious poetry, I turn to Gerard Manley Hopkins. His words seem freshly minted, and the delight I get from reading his poems does not differ from that of a child who discovers another, exciting use for language.

For this reason, years ago, the priest who introduced me to contemporary English poetry included Hopkins in his short list of poets to teach, together with W. B. Yeats, Ezra Pound and T. S. Eliot.

This despite the fact that Hopkins belonged to the Victorian era. Literary historians agree that somehow Hopkins’ sprung rhythm gave readers a foretaste of free verse.

Hopkins could give a traditional form, the Italian sonnet, a fresh feel. Nothing of the form intrudes as one reads because of the crispness of the words and the bite of the images.

The world is charged with the grandeur of God.

It will flame out, like shining from shook foil;

It gathers to a greatness, like the ooze of oil

Crushed. Why do men then now not reck his rod?

And wears man’s smudge and shares man’s smell: the soil

Is bare now, nor can foot feel, being shod.

And for all this, nature is never spent;

There lives the dearest freshness deep down things;

And though the last lights off the black West went

Because the Holy Ghost over the bent

World broods with warm breast and with ah! bright wings.

Hopkins lived towards the end of the Industrial Revolution, which began in Great Britain.

The world had moved from nature to factory, and, coinciding with the French Enlightenment, from faith to reason, with dehumanizing consequences.

For his part, Nietzsche, a contemporary of Hopkins, proclaimed “the death of God.”

This line bears a hint of this, “The world is charged with the grandeur of God.”

The sparks of this grandeur show in such as the glitter of tinsel, and “gathers to a greatness” (Hopkins favored the use of alliteration), in the same way that oil collects when oozing out of pressed olives. But, Hopkins laments, man ignores God’s presence and authority (he does not “reck his rod”), and continues to enslave himself to the affairs of the world, to secular preoccupations, to work in particular (“And all is seared with trade; bleared, smeared with toil”), such that man has lost contact with God’s creation (“the soil / Is bare now, nor can foot feel, being shod.”)

Hopkins describes a world that needs healing and forgiveness, which the Spirit alone can give, the Spirit that, the evangelist John tells us, the risen Jesus breathed into the disciples:

“On the evening of that day, the first day of the week, the doors being shut where the disciples were, for fear of the Jews, Jesus came and stood among them and said to them, ‘Peace be with you.’

“When he had said this, he showed them his hands and his side. Then the disciples were glad when they saw the Lord.

“Jesus said to them again, ‘Peace be with you. As the Father has sent me, even so I send you.’

The Holy Spirit dwells inexhaustibly in the world, despite its smudge and smell, despite its physical and spiritual squalor. “

And for all this, nature is never spent; / There lives the dearest freshness deep down things…”

We moderns just do not realize this, God’s pervading presence, of which for our good we need to be constantly reminded. (Incidentally, Hopkins pointed to the Real Presence of Christ in the consecrated bread and wine of the Eucharist as the reason why he converted to Catholicism.)

And so, although our daily journey ends with night, we can expect the Pentecost of morning, because “the Holy Ghost over the bent / World broods with warm breast and with ah! bright wings.”