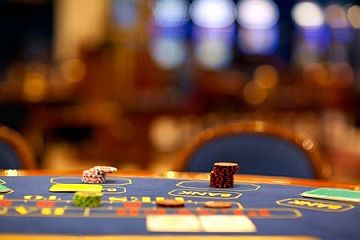 A gambling table found inside a casino.
INQUIRER.net STOCK PHOTO

Following an attack at Resorts World Manila by a lone gunman that left 38 dead, casino goers may soon pay a P3,000 entrance fee once this bill filed in the House of Representatives becomes a law.

Isabela Rep. Rodolfo Albano III filed a bill seeking to impose an entrance fee of P3,000 in all casinos and other similar gaming establishments in the country.

According to the bill, the payment of an entrance fee seeks to ensure that the “person entering any and all casinos have the financial resources to engage in any form of gambling.”

In a phone interview, Albano said his bill seeks to address gambling addiction among the poor who are wasting their money in casinos.

The bill was filed to address gambling addiction, especially as the attack at Resorts World Manila in an apparent robbery try was carried out by a lone gunman described as a gambling addict, deep in debt and was facing a forfeiture case in court.

Jessie Javier Carlos, a dismissed tax specialist at the Department of Finance, carried out the attack at Resorts World Manila, where he fired shots and burned tables and chairs before stealing some P113.1 million worth of casino chips. Most of the victims in the incident died due to suffocation. The gunman later killed himself.

Albano said his filing of the bill was an “offshoot” of the casino attack and of the problem of gambling addiction in general among the poor.
The congressman said his bill would serve as a “deterrent to poor addicts” who would not be able to afford P3,000 a day or around P90,000 a month to satisfy their daily dose of gambling.

“It only seeks to address some poor people who have no more money and yet go inside and gamble all they have left for their families… Deterrent also to poor addicts,” Albano said in a phone interview.

The bill would also have the security feature of requiring casino goers to present their IDs before paying their entrance fees and getting their receipts, Albano said.

According to the bill, the money collected from entrance fees would be pooled into a special fund for the maintenance and creation of children and youth welfare centers under the supervision of the Department of Social Work and Development.

At least 50 percent of the amount would be allotted for the children and youth welfare centers in the city or municipality where the casino is located, the bill added.

In the explanatory note, Albano said the attack at Resorts World Manila is a “called attention to the sinister effects of gambling addiction especially among those who do not have or can ill afford the financial resources needed to engage in casino gambling.”

Read Next
Military fighting Maute even on social media