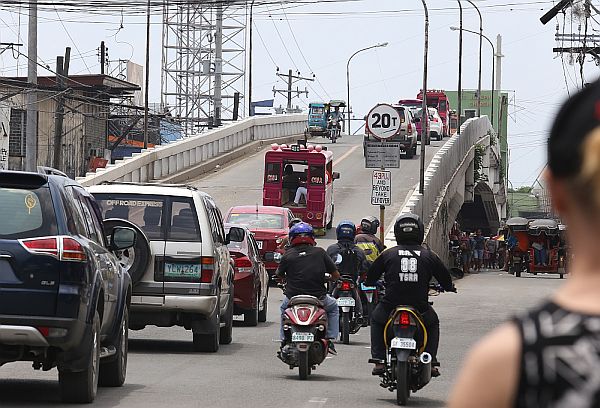 South Cebu motorists passing through the Tabunok Flyover in Talisay City will now have to find alternative routes until June 22 following the temporary closure of the bridge to give way to the second phase of rehabilitation works.
CDN FILE PHOTO

FOR most commuters from southern Cebu, there is no other way but to bear the heavy traffic caused by the closure of the Tabunok Flyover for repairs.

Jerome Bacanas, 45, travels daily from Minglanilla to Cebu City where he works as a mall staff. He rides a jeepney.

The City of Talisay Traffic Operation Development Authority (CT-TODA) closed the flyover so that the Department of Public Works and Highways (DPWH) can begin phase two of rehabilitation work on the bridge.

It will remain closed 24 hours a day until June 22.

For 23-year-old Vanessa Cabrera, she will just look for other ways to get to Lapu-Lapu City where she currently works as a trainee at the Mactan-Cebu International Airport.

“Maybe I will just take the MyBus and pass through SRP. I have to adjust my time now like I will leave one hour and 30 minutes earlier than my usual time,” she told CDN.

In an earlier advisory, DPWH Second District Engineer Leslie Anthony Molina said the second phase of the project costs P20 million and will be undertaken by PLD Construction. This includes the retrofitting of the expansion joints.

Motorists had been advised to avoid passing through the area near the flyover so as not to get stuck in heavy traffic.

The only alternative route motorists can take is through the Cebu South Coastal Road (CSCR) in the South Road Properties (SRP).

CT-TODA Chief Almond dela Peña said he has already instructed the 28 traffic personnel assigned in the areas near the Tabunok Flyover to double their efforts in apprehending traffic violators in order to avoid more congestion in the area.