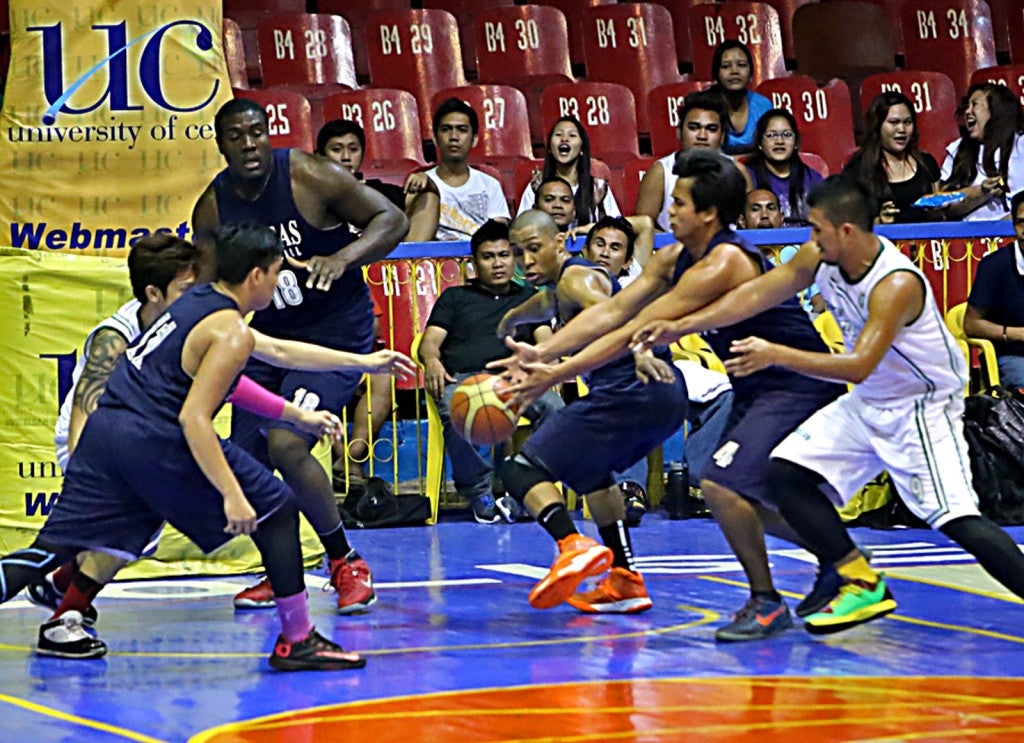 Players from SWU and UV go for the looseball in this bit of Sinulog Cup action at the Cebu Coliseum.
CDN PHOTO/LITO TECSON

The Southwestern University (SWU) Cobras pulled the rug out from under their bitter rivals, the University of the Visayas (UV) Green Lancers as they emerged victorious, 68-60, in a highly charged encounter in the opening day of the 2014 Mayor Mike Rama Sinulog Cup collegiate basketball tournament yesterday at the Cebu Coliseum.
When it comes to these two teams, the time and the place are virtually irrelevant as the Cobras and Lancers played tooth-and-nail against one another all-game long with several skirmishes breaking out between the players from the opposing sides.
In the end, SWU eked out the win, thanks to import Landry Sanjo, who scored the Cobras’ last eight points including a key putback and a surprising three-pointer that sealed the win for the Philippine Collegiate Champions League runners-up.
In the first game, the University of San Jose-Recoletos (USJ-R) Jaguars debuted their new import, Quentin Luzoladio, in style as they creamed the University of San Carlos (USC) Warriors behind the latter’s 25-point outburst.
Another rookie, Mart Mutya, also stepped up with 16 markers to help give brand new head coach Jun Noel his first win in this competition.
All eyes, though, were on the match-up between UV and SWU, a rivalry that has simmered through time immemorial.
For a while, it appeared as if the Cobras would run away with the win as they took advantage of UV’s rookie-laden starting five to race off to a 20-6 lead in the first period.
However, the Green Lancers came roaring back behind former Cesafi MVP Wowie Escosio, John Abad, Alwyn Aguirre and Josue Segumpan to come within two, 31-33, at halftime.
SWU entered the final canto with a five-point lead, 50-45, and extended it to nine, 58-49, off baskets by Sanjo, Adams Mohammed and Bernie Bregondo. UV did not let up and were within three, 60-63, after consecutive midrange jumpers by Segumpan and Steve Akomo with 1:38 remaining.
But Sanjo was simply too much to handle as he muscled his way to get the offensive rebound and the basket to put SWU in front, 65-60, with 49.6 ticks left on the clock.
SWU’s defense then forced UV into a 24-second shot-clock violation and Sanjo capped the evening off with a shot-clock beating trey that settled the final tally.
The 6-foot-7 Cameroonian finished with 22 points while Monbert Arong added 15 markers.
UV was led by the 16 of Escosio but suffered greatly from the four-point performance of their star guard, Abad. UV’s new import, Jean-Marie Mpouma had a quiet debut with just two points.