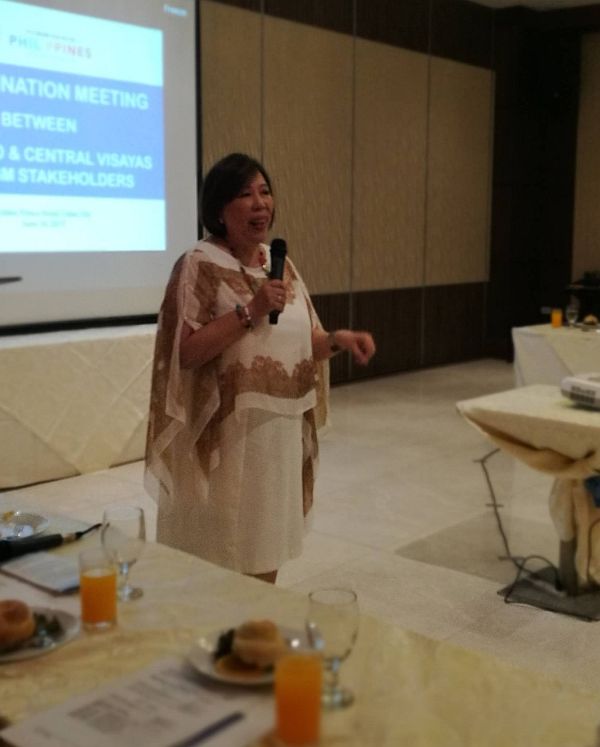 Tourism Undersecretary Alma Rita Jimenez says local governments and stakeholders should produce tourism offerings that can stand out from the rest of the world.
CDN Photo/Christian Maningo

An official of the Department of Tourism (DOT) reiterated the importance of inclusive growth among industry stakeholders amid strong numbers in tourism arrivals in the first quarter of 2017.

The country’s tourism arrivals remain robust with 1.8 million arrivals as of end of April this year.

Jimenez, undersecretary for tourism regulation, coordination and resource generation, said tourism is the third biggest contributor to the gross domestic product at 8.2 percent translating to 4.98 million jobs in 2015.

Jimenez noted the changing landscape of the tourism industry, which is “blurring the divide between companies and communities.”
Innovation

She said innovation is crucial in navigating through these twists, turns and changes in the landscape.

“When people think about tourism, they usually think of beautiful destinations. Many don’t realize that tourism means developing and implementing strategies that make our offerings stand out from the rest of the world,” Jimenez said.

Jimenez also called on tourism players to optimize the attractiveness of destinations to lure international and domestic tourists.

“Domestic tourists provide a stable number of arrivals in an industry that can affected (sic) by seasonal changes and triggered by certain events,” she said.

DOT rolled out 150 training programs in 2016 on various topics including the Filipino brand of service, building tourism enterprises and crisis management.

The department is also implementing a convergence program with the Department of Trade and Industry (DTI) focusing on the MSMEs as engines of growth by giving them accessible funding options and technical training.

“We are also working with DOLE (Department of Labor and Employment) for skills-building activities and reintegration of OFWs (overseas Filipino workers) as tour guides as they are fluent in foreign languages,” Jimenez said.

Jimenez emphasized the importance of promoting responsible use of natural resources, preserving heritage and culture, and protecting the environment.

She said it’s possible to find a balance between limit and usage in tourism development.

“Unbridled tourism development without a concrete program for sustainability can damage societies and environment,” Jimenez said.