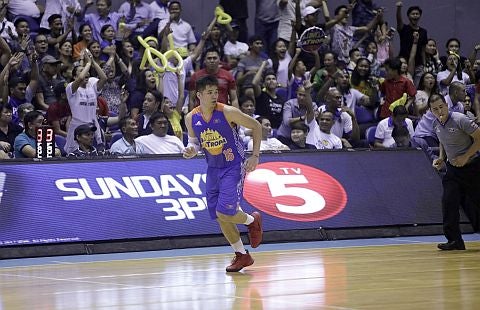 RR Pogoy of TNT runs back on defense after hitting a triple in Game 1 of the PBA Commissioner’s Cup Finals against San Miguel Wednesday night.
pba images

Cebuano rookie Roger Pogoy showed that being a rookie doesn’t mean he had to play like one as he scored 27 points—a new career-high—in his PBA finals debut in TNT KaTropa’s 104-102 squeaker over the favored San Miguel Beermen in the Commissioner’s Cup on Wednesday.

Showing poise beyond his years, the former University of Cebu (UC) standout scored 13 of those points in the final quarter and had five three-pointers in what was a memorable first finals appearance for the proud son of Talisay City.

In a talk with Cebu Daily News, Pogoy said he had no other choice but to step up his game especially with the absence of veterans Ranidel de Ocampo and Ryan Reyes and the offensive struggles of star guard Jayson Castro who made just six of his 17 attempts from the field.

Pogoy is no stranger to playing in high stakes competition. After all, he has already competed in the Cesafi juniors finals, the UAAP finals as well as the PBA D-League finals.

Nerves, though, still played a part, he admitted as much.

With not much time to prepare, Pogoy said that he would be bringing the same mindset to Game 2 of the championship series.