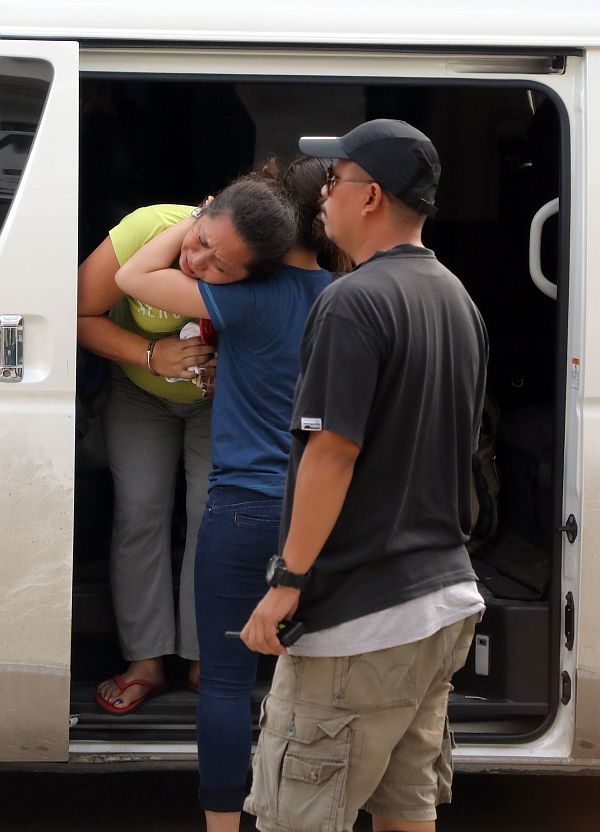 Malabago, Badian Barangay Captain Epifania Alvizo (handcuffed) weeps as she is met by a relative at the office of the Philippine Drug Enforcement Agency ( PDEA) after her arrest.
CDN PHOTO/TONEE DESPOJO

And it was because of her extravagant lifestyle that authorities began to suspect the source of her wealth and eventually found out that she was into illegal drug trade.

What was more surprising, according to Senior Insp. Bonifacio Pareja Jr., chief of the Badian Police Station was that Alvizo’s lifestyle started to improve dramatically when her husband was jailed.

The suspect’s husband, Marieto, is serving a life sentence at the National Bilibdi Prison (NBP) for the 1998 kidnapping of businessman Regan King.
“That is one of the theories that we are looking into, the possibility that her supply of illegal drug came from the Bilibid,” said Pareja.

She became a subject of a buy-bust operation by the Philippine Enforcement Drug Agency in Central Visayas (PDEA-7) and was arrested when she allegedly sold a pack of suspected shabu worth P150,000 to a poseur-buyer.

The ensuing search of her house yielded a big pack of suspected shabu with an estimated market value of P1.5 million.

Four bank books showing transactions in millions of pesos were also recovered from the suspect’s house.

“We were really wondering why she had luxury cars. Her husband is in jail and based in our research, a barangay captain of a third-class municipality can only earn up to P3,500 a month,” said Pareja.

“Her bungalow house could also be worth between P15 million and P20 million,” said Pareja.

He said the Alvizos were so moneyed that there were instances that her son lost P100,000 in a cockfight.

The police officer said Alvizo own a rice retailing store in the barangay.

“I also have a rice retailing store, but I can’t still afford to buy a car,” Pareja said.

Pareja said that when he assumed post as chief of police in Badian, he already received reports that the barangay captain was involved in illegal drug business.

“She was a high value target in the provincial level,” he said.

With the arrest of Alvizo, the first barangay councilor, who happens to be her son, will take over her position and will assume as the new barangay chief.

He said regardless of their relationship, the law provides that the first councilor Kempee is mandated by the law to take over the vacancy in the position as barangay captain of Malabago in Badian.

“It is his right as an elected officer to assume that post. The law will prevail no matter what. There is no need for any orders from the DILG or any concerned government bodies to facilitate his assumption as barangay captain,” he added.

Meanwhile the provincial government warned barangay officials against involvement in drugs, after Epifania’s arrest in a drug bust operation, which netted P1.5 million in shabu.

“(What happened to Alvizo) is a warning to those who continue to commit these illegal activities that our operations against them do not exclude and select,” said Carmen Remedios Durano of the Cebu Provincial Anti-Drug Abuse Office (CPADAO).

“We have been receiving reports that there are barangay officials who are drug users. As to being drug protectors, I have not receive any report about that,” said Cosap chief Garry Lao.

He assured that they will continue cleansing the barangays by conducting more surprise drug tests to identify the users.

Read Next
Six survivors pulled out of collapsed building in Kananga, Leyte