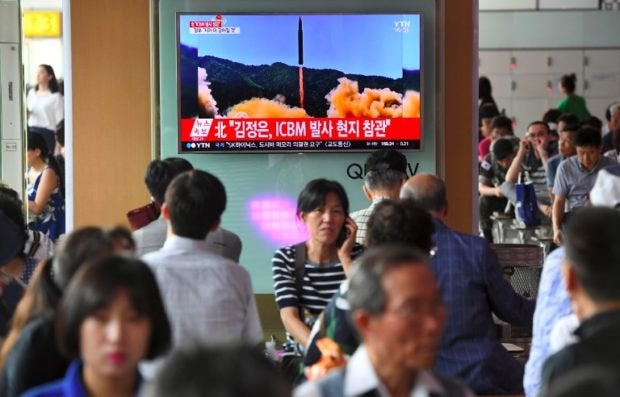 People watch a television broadcast showing a picture of North Korea’s test launch of an intercontinental ballistic missile (ICBM), at a railway station in Seoul on July 4, 2017.
(AFP)

North Korea on Sunday lashed out at a live-fire drill the US and South Korea staged in a show of force against Pyongyang, accusing Washington of pushing the peninsula to the “tipping point” of nuclear war.

The test sparked global alarm as it suggested North Korea now possessed an ICBM capable of reaching Alaska, a major milestone for the reclusive, nuclear-armed state.

The North’s state-run Rodong newspaper accused Washington and Seoul of ratcheting up tensions with the drill, in an editorial titled “Don’t play with fire on a powder keg.”

“The US, with its dangerous military provocation, is pushing the risk of a nuclear war on the peninsula to a tipping point,” it said, describing the peninsula as the “world’s biggest tinderbox.”