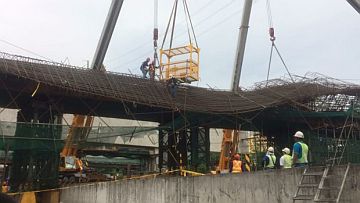 Following the collapse of a Skyway Stage 3 structure in Makati City, Senator Joel Villanueva on Tuesday pressed for the immediate passage of a bill that will promote a safer workplace.

Five construction workers of DM Consunji Inc. (DMCI) were reportedly injured in the incident that also damaged two vehicles after the steel bars being constructed to form a coping beam of the Skyway in Makati collapsed.

“Incidents such as this recent collapse of structure in South Superhighway could have been avoided if we only have a stricter law that would penalize companies which are non-compliant of our country’s regulations on occupational safety and health standards,” Villanueva, chair of the Senate committee on labor, employment and human resources, said in a statement.

The senator is the author of Senate Bill No. 1317 or “An Act Strengthening Compliance with Occupational Safety and Health Standards (OSHS) and Providing Penalties for Violations Thereof” that seeks to amend the 41-year old Labor Code of the Philippines which, at present, does not declare unlawful violations of OSHS.

The bill seeks to impose an administrative penalty of P100,000 for erring employers for every day of “non-correction” of violation, while a penalty ranging from P250,000 to P500,000 would be slapped if a worker dies.

Villanueva noted that for the longest time, occupational health and safety standards violations have no fines or penalties. The Department of Labor and Employment (DOLE), he said, only issues a Work Stoppage Order (WSO) if there is an imminent danger or would result in disabling injury.

“Neglecting to comply with occupational safety and health standards does not only pose risk to our workers but may also inconvenience other people as it could cause heavy traffic and even stop business transactions near the affected workplace,” he said.

“Violations of OSH standards are not only patent disregard of the standards but deliberate disrespect of the well-being of our workers and derogation of their right to safe and healthy workplaces. I believe the government must seriously look into this,” the senator added.