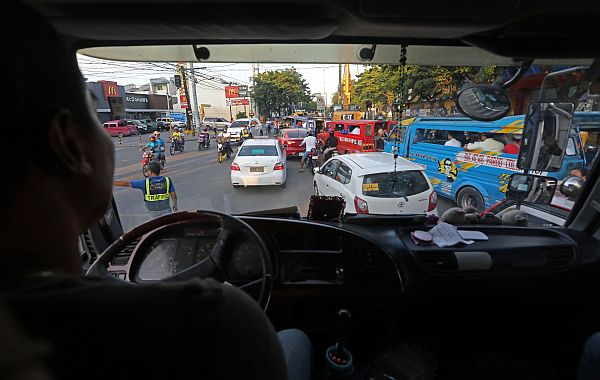 Heavy traffic is now projected to be a daily occurrence along the Cebu south highway as construction starts for the P683 million underpass along N. Bacalso Avenue and F. Llamas Street in Barangay Mambaling, Cebu City. The project, undertaken by the Department of Public Works and Highways (DPWH), will be completed in 18 months.
CDN PHOTO/TONEE DESPOJO

Cebu City Transportation Office (CCTO) implemented a couple of changes, including opening one lane of the southbound side of N. Bacalso Avenue for northbound vehicles, but it failed to ease the traffic gridlock.

From 7 a.m. to 10 a.m., there will be a truck ban along N. Bacalso Avenue. The ban will also be implemented from 5 p.m. to 8 p.m. These will include fuel tankers, cement mixers, dump trucks, garbage trucks, delivery trucks, armored cars, provincial buses and trailer trucks with six wheels or more.

“Our purpose for this is to lessen the burden on our passengers especially the workers and students, ordinary people that have to go to work in Cebu City. This is so that they won’t suffer from the heat and dust coming from trucks while they are stuck in traffic,” said Cebu City Councilor Dave Tumulak, who heads the City Council’s committee on public order and safety.

At the same time, a new traffic scheme will be implemented in the intersection of N. Bacalso Avenue and F. Llamas St., where the P683-million project of the Department of Public Works and Highways (DPWH) 7 is being implemented.

The first phase of the project involves the closure of the northbound side of N. Bacalso Avenue in front of the Shopwise mall. This means only the three-lane southbound side opposite of this area will be open to traffic.

However, the city government decided to implement one-way flow of traffic in the area during peak hours in the morning and in the afternoon.
According to CCTO operations chief Francisco Ouano, in the morning, the southbound side beside the closed portion will be used by vehicles coming from the south going to Cebu City.

During this time, those coming from Cebu City going south can take the alternate route from N. Bacalso, turn right to Caimito Street, turn left to Ganciang St., another left to F. Llamas St. and turn right back to N. Bacalso Avenue. This route will also be one-way for southbound vehicles to avoid congestion.

On the other hand, in the peak hours in the afternoon, the southbound side beside the closed portion will be used solely by vehicles coming from Cebu City going to the south.

But unlike the truck ban which has a fixed schedule in the morning and in the afternoon, Ouano said this traffic scheme will not follow a specific schedule. He said it will depend on the actual situation in the area as observed by traffic enforcers deployed.

This is why he is advising motorists to pay attention to the direction given by traffic enforcers and to follow whatever changes may be implemented in the area.

Other alternative roads which will remain open to two-way traffic throughout the day are Cabreros St., Tagunol St. and Sabellano St.

Ouano said this can be taken by other vehicles especially those privately owned.

The first phase of the project will involve the boring of piles for the foundation of the retaining wall for the underpass. It will take three to four months.

The entire project is divided into six phases. All in all, it will take almost two years for the project to be completed.

According to Tumulak who was at the site when the closure started, vehicles were in a gridlock from 6 a.m. to 8 a.m. since the roads were opened to two-way traffic.

With the one-way schemes to be implemented, he said this can help ensure a smoother traffic flow.

Among those who were stuck in the gridlock was 19-year-old Anthony Caruza, a maritime student in University of Cebu–Maritime Education and Training Center (UC-METC) located near the Mambaling access road.

“Na-late g’yud ko sa kagrabe sa traffic ganihang buntag. Init pa g’yud kaayo unya abog sa aso sa sakyanan (I was really late for school in the morning due to the heavy traffic. It was also very hot and the smoke from the vehicles is uncomfortable),” he told Cebu Daily News yesterday afternoon.

This was why he decided to just walk from school all the way to his boarding house in Barangay Basak San Nicolas.

He said it was more comfortable to walk home from school since it was not hot anymore.

“Mas paspas pa siguro ko maabot sa boarding house if maglakaw kaysa mosakay og jeep kay grabe ang traffic (Perhaps I would get to my boarding house faster if I walk instead of riding a jeepney because of the heavy traffic),” he said.

With the new scheme as well as the truck ban, only public utility vehicles like jeepneys, taxis, KMK buses and some private vehicles will be passing through the construction area.

Tumulak explained that they have exempted KMK buses from the truck ban since they carry a lot of passengers from SM City Cebu to Naga City.
The buses and other trucks will have to pass through the South Road Properties (SRP).

He also advised private car owners to look for their own alternative roads to avoid having to pass through N. Bacalso Avenue as much as possible.
The truck ban and new traffic scheme was announced by Tumulak and Cebu City Mayor Tomas Osmeña at noon yesterday.

The mayor said he tasked Tumulak to decide on the changes after observing the situation yesterday morning.

“Trucks will not be allowed in certain times. Even (private) cars, it’s up to him to decide. I gave him my suggestion to ban private cars during critical hours,” Osmeña said.

“Those who have private cars can take a taxi or if you are the boss of your company, go early or go late. What’s important is we prioritize the working public so people can go to work and school,” he added.

However, Tumulak said it is not yet advisable to completely ban private cars in the area.

He suggested though that private car owners can opt to do carpooling with each other in order to avoid adding to the congestion.

At the same time, they should also avoid the N. Bacalso and F. Llamas intersection. Private cars can take the alternative road of Cabreros St., Tagunol St., and Sabellano St.