Church scholar steals from his church 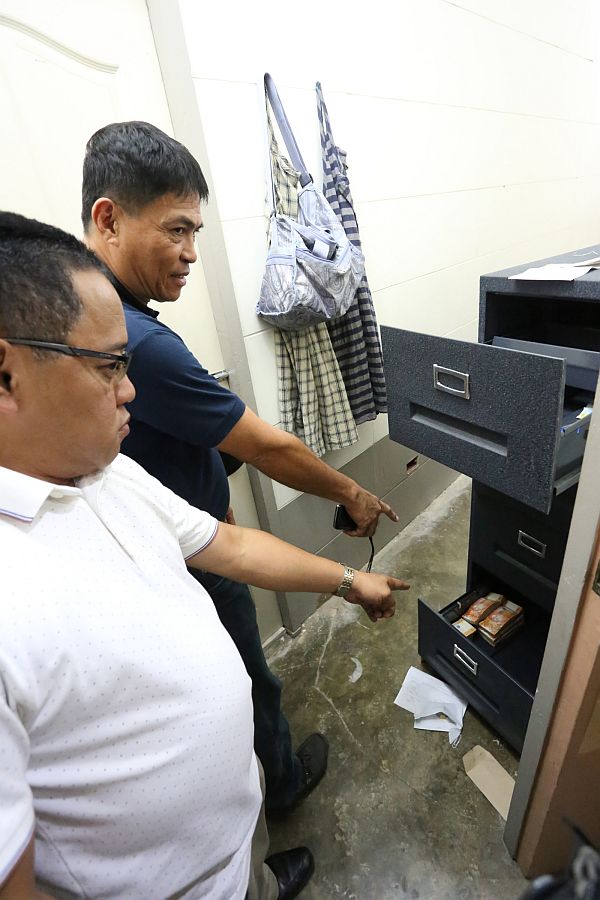 Cebu City Councilor Dave Tumulak and a police investigator inspect the steel cabinet inside the parish office of the Mabolo Church where P400,000 in donations was stolen by a church worker.

The money was inside a steel box, whose key was kept by Roxanne Valmoria, an employee of the church, who handles the money of the church.

Valmoria identified the suspect as Alexander Lumapac, who also works for the parish.

According to Mabolo Police Station Chief Jacinto Mandal, Lumapac beat up Valmoria because she could identify him as the one who stole the church money.

The keys of the cabinet where the church kept their cash donations were in the possession of Valmoria.

Lumapac allegedly got the keys from Valmoria who was sleeping at that time.

“That is why he mauled the victim because (Lumapac) was identified by the victim even though he was covering half of his face,” Mandal said.

The crime happened at around 10 p.m. last Sunday but was discovered only at 6 a.m. the next day after the first Mass.

Mandal said a sacristan found a bloodied Valmoria inside the parish office.

Valmoria was immediately taken to the hospital for treatment.

“He (suspect) is a church scholar. He also has a relative, who is a nun at the parish,” Mandal said in Cebuano.

“We demand justice. We will file a case against the suspect,” Romanillos said.

Cebu City Councilor Davide Tumulak urged the church to tighten their security especially that this was not the first time that the Mabolo church was burglarized.

Vice Mayor Edgardo Labella also reminded churches and other institutions not to keep huge sums of money inside their offices.

“That should be deposited in the bank every now and then because that would attract robbers, especially those who know the area, the possibility of an inside job,” Labella said.

As of this writing, the suspect is still at large and the police are still conducting hot pursuit operation.

TAGS: church, from, his, scholar, steals