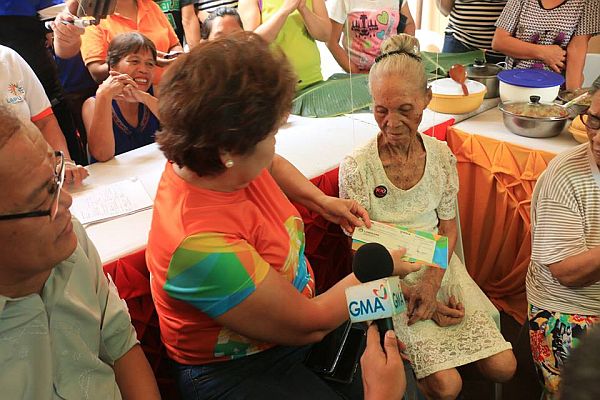 FIRST from THE CITY

ONE-hundred-year-old Dionesia Pahugot was almost speechless when she received P100,000 cash incentive from the Lapu-Lapu City government during her birthday yesterday.

Pahugot is the first recipient of the monetary award since the Lapu-Lapu City Council approved an ordinance giving P100,000 cash incentive to centenarians last month.

Centenarians in Lapu-Lapu City were previously given a cash gift and food and drinks by Mayor Radaza from her personal pocket.

Mayor Radaza and her company also brought two roasted pigs (lechon), cake made by the Kababayen-an Association, food and drinks, and they later feasted on it together with the centenarian’s family, relatives and neighbors.

Lola Dionesia only uttered the words, “kadaku ani,” (this is too much) when asked how she is going to spend the money.

Lola Dionesia was born in 1917 in Barangay Basak, Lapu-Lapu City, and moved to Barangay Gun-ob when she got married to Mariano Pahugot, who died in 1987.

Her grandchild Karen Joy, 30, could not even remember her lola taken to the hospital though her lola smoked dried tobacco leaves. She said her lola likes to eat fish and vegetables.

Radaza said they have long been wanting to give P100,0000 cash incentive for the centenarians and an ordinance supporting it was finally approved by the City Council in July this year.

“We will also work out for the centenarians’ cash incentives from the national government,” said Radaza.

JO from Barili, Cebu positive for drug use, risks termination