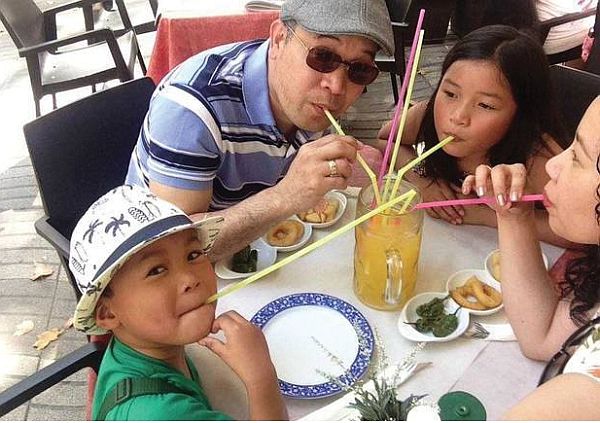 Norman Potot (2nd from left) and his family enjoy a meal in this photo taken a few hours before the terror attack in Barcelona’s Las Ramblas tourist district.
Contributed photo/Dennis Santillan

What was supposed to be a fun vacation to celebrate a son’s birthday in Spain turned out to be traumatic and painful experience for a Cebuano family based in Ireland.

Norman Potot, 45, who is from Barangay Gabi, Cordova, Cebu, and his wife and two children were among the victims of the terrorist attack in Barcelona, Spain on Thursday, where a speeding van plowed through a crowd at the famous Las Ramblas promenade. The attack left 13 people dead and scores injured.

Norman in an online interview with Cebu Daily News said that the family, who is now based in Ballsbridge, Dublin, Ireland, arrived in Spain last Monday for a vacation to celebrate Nathaniel Paul’s birthday.

Norman and his wife, Pederlita, who is from Ozamiz City, are hotel employees in Dublin.

Hours before the terrorist attack last Thursday at Barcelona’s Las Ramblas tourist district, the four of them were innocently touring the place until a van driven by a terrorist, plowed through the pedestrians.

Norman said he was busy looking for key chains for souvenir gifts or pasalubong in the area when a white van plowed through the pedestrians.

(While I was looking for key chains, there was suddenly a commotion. When I turned to find out what the ruckus was about, I saw a white van plowing through the crowd. And before I knew it, the van hit me on my side throwing me a few meters and I fell unconscious on the ground.)

Norman said that when he regained consciousness, his wife told him that he was bleeding when he was found lying along the road.

(According to my wife, she found me bleeding, lying unconscious on the ground. She also fell when the crowd started running in panic because of the suddenness of the attack. She hurriedly got up and she saw me on the ground, bleeding. She called me when she saw me … daddy … daddy … and she slapped my face to wake me up as she was thinking that I was already dead.)

Pearly and his children were also injured during the attack, but they were hurt during the commotion as the crowd started fleeing the area in panic.

Norman is still under observation at the Hospital Del Mar in Barcelona with his son, Nathaniel Paul, where they share a room.

Norman said that he suffered a fracture in the skull, but doctors told him it was not a serious injury.

However, he was put under observation because of the minor hematoma in his kidney.

His son, Nathaniel, is still recovering after a surgery to fix a fracture in his left leg.

Norman said that Nathaniel fell down and someone stepped on his leg during the commotion.

Norman also said that they are grateful to the Filipino community, the Consuls from the Philippines and Ireland, who visited the family in the hospital and expressed their support for them.

A certain Doc Eric, a doctor who is based in Barcelona also helped them. In fact, his daughter who is already out of danger, is temporarily staying at Doc Eric’s place.

Former Cebu journalist Dennis Santillan, who is now based in Ireland, said Pearly told him that the family were traumatized from the incident, with Nathaniel, who kept crying because of the experience.

Santillan is a family friend of the Potot family as Santillan’s wife and Pearly worked in the same hotel in Dublin.

It was Pearly who first worked in Dublin and when she got married, she brought Norman in Dublin to work together in a hotel and established a family there, Santillan said.

All of them are Irish citizens.