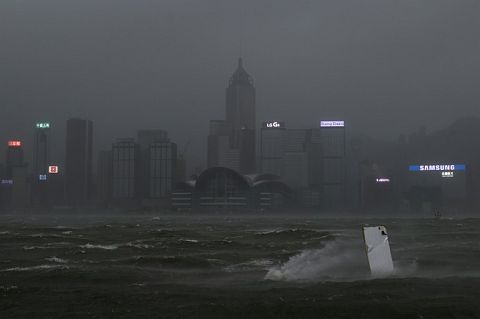 Hong Kong raised its highest storm warning Wednesday as Severe Typhoon Hato brought the city to a standstill, shutting down the stock market and forcing the cancellation of hundreds of flights as heavy rain and winds pummeled the territory.

It was the first such alert in five years and only the third time the Typhoon 10 warning has been issued since 1997, when the former British colony was handed over to China.

Gusts of up to 168 kilometers per hour brought flying debris, tearing down trees and scaffolding and breaking construction cranes. Shops and homes taped up their windows to protect them from shattering.

The normally packed streets of Hong Kong island were eerily empty, aside from a few who tried to battle through the winds.

Some ventured out with cameras to snap and video the storm. One Lohas Park resident had brought his young daughter down to experience the weather. “I came down here to feel the winds,” he told AFP.

The government said that two men had been injured so far. Around 200 people have sought refuge in temporary shelters.

The typhoon was expected to edge towards the Pearl River Estuary and to make landfall within around 100 kilometers to the west of Hong Kong by Wednesday afternoon.

Ferries were suspended as was the city’s airport express train line, while the metro rail and buses operated on a limited service.

Hong Kong is regularly besieged by typhoons between July and October, but direct hits are rare.

The city saw its strongest storm in 1962 when the eye of typhoon Wanda passed over and gusts of 284 kilometers per hour were recorded.

Since then, Hong Kong has adapted to typhoons, including making sure its highest commercial skyscrapers can sway in the wind. The extensive lockdown procedures mean the storms rarely cause deaths.

The last time the Typhoon 10 signal was raised in Hong Kong was for Typhoon Vicente in 2012.

Read Next
SLOW DAY FOR PH