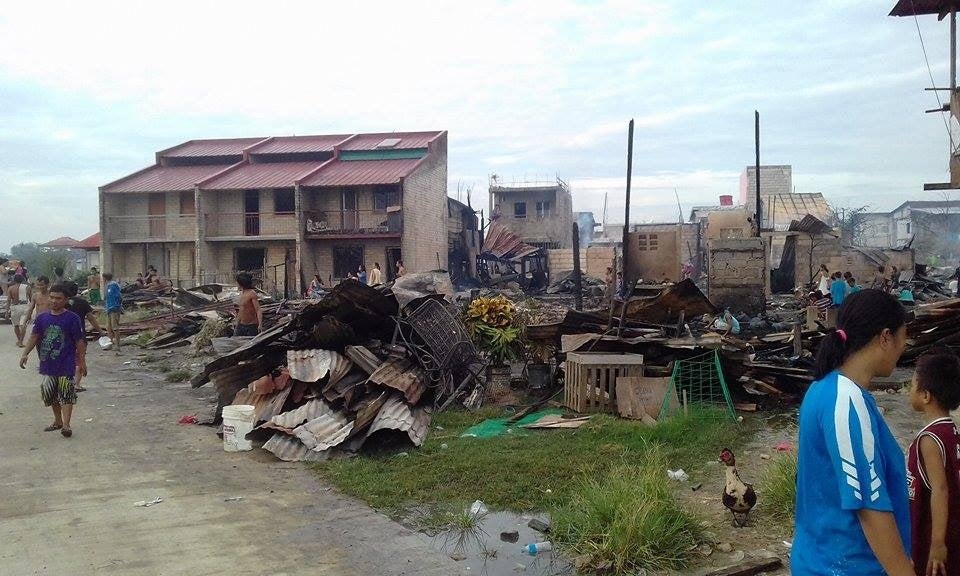 At least 100 families were displaced when their homes at the relocation site in Barangay Pakna-an, Mandaue City, were destroyed by fire at past 2 a.m. yesterday.

The Mandaue City Fire Station said 86 houses were razed by the fire that raged for an hour before being put out by firefighters from Talisay City and Liloan town.

The displaced families were temporarily housed at a nearby gymnasium while the others stayed in tents put up along the road.

Six persons were reported to have sustained burns and wounds, but no one died.

Nacua said they are verifying reports that the fire originated at the house of Stella Abad where a neighbor supposedly spotted four unidentified men running away from her home a few minutes before the fire broke out.

Stella Abad was not at home when the fire broke out, but her two sons ran away after seeing flames and smoke from the second floor.

Stella Abad was the wife of 43-year-old Jerome Abad and mother to Junmar Abad who were killed in a shootout with police over an aborted drug deal in August 30 last year.

Mandaue City Mayor Luigi Quisumbing visited the fire victims in the morning to see if they are being attended to by the City Social Welfare Services, City Health Office and the barangay officials.

Meals, bedding materials and toiletries were provided by social welfare personnel to the families who numbered 440 persons based on the initial CSWS list.

Mayor Quisumbing said homeowners will receive P10,000 cash aid while P5,000 will be given to the renters.

The fire victims immediately started clearing debris from the fire site to rebuild their homes.

Pakna-an Barangay Chairman Malaquias Soco said they are still communicating with the Commission on Audit (COA) so they can declare a state of calamity in the area.

He said COA requires that 25 percent of the area’s population should be verified as displaced before it can be declared under calamity status.

Read Next
Settlers worried over relocation in wake of CICC deal