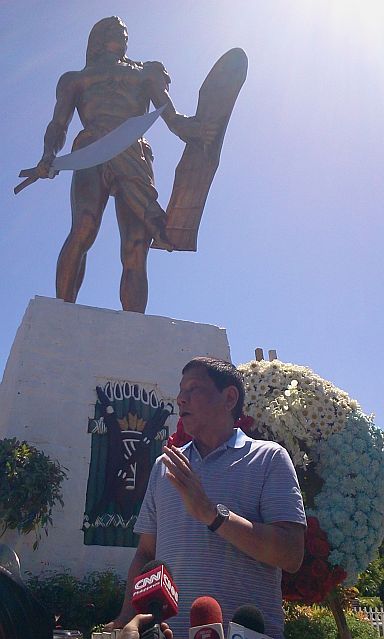 Not all heroes came from Luzon.

President Rodrigo Duterte said there are also heroes like Lapu-Lapu of Cebu and Francisco Dagohoy of Bohol provinces who displayed bravery against colonizers.

However, he said, their names could not be found in the roll of the country’s national heroes.

“I don’t know who was the office responsible for this fiasco. … Instead of giving him (Lapu-Lapu) honor, a place under the sun, ang pangalan tuloy ng Lapu-Lapu ginawa nilang isda. Eh kaming mga Bisaya, we have kept our silence long enough, kasi wala man rin akong magagawa,” Duterte said in a message which he delivered during the National Heroes Day celebration held at Fort Bonifacio in Taguig City.

But this will have to change under his presidency. Duterte said he will make sure that Lapu-Lapu and others like him will be given the recognition that they deserve.

“Every Filipino who (has) actually done something for our country must be recognized, living or dead,” he said.

Duterte said it is important to always recognize the bravery of every Filipino citizen because their heroism “made our nation what (it is) today.”

“More importantly, we honor our nameless heroes whose exploits were never published in history books (or) whose death anniversaries are not celebrated as public holidays. We thank them still for their deeds and remember their exploits forever,” he said.

“As we further our efforts to build a stronger, peaceful, and more secure nation, we count on our people to emulate the patriotism of our heroes so that we may all prevail against the looming threats of criminality, terrorism and (illegal) drugs,” Duterte added.

A copy of the transcript of Duterte’s speech is posted on the official webpage of the Presidential Communications Operations Office (PCOO).
Lapu-Lapu City Mayor Paz Radaza said he is happy with the President’s effort to also recognize Lapu-Lapu’s bravery.

On April 26 or a day before the annual re-enactment of the Kadaugan sa Mactan, the Office of the President released Proclamation No. 200 declaring April 27 of every year as Lapu-Lapu Day.

Mayor Radaza is confident that a House Bill sponsored by her daughter, Lapu-Lapu City Lone District Rep. Aileen Radaza, seeking to declare Lapu-Lapu Day as a national holiday, will also be passed under the Duterte administration.

“To me, one of my best heroes from the past is Lapu-Lapu. He’s the only one who won. Everybody else lost. And how come he is not made a hero at the same level as the others?” Osmeña said in a message which he delivered during the city’s National Heroes’ Day celebration held at the Plaza Sugbo on Monday morning.

We should be proud of that also. But because we are not part of Metro Manila, they believe that if you’re not a Tagalog, you’re not even Filipino).”