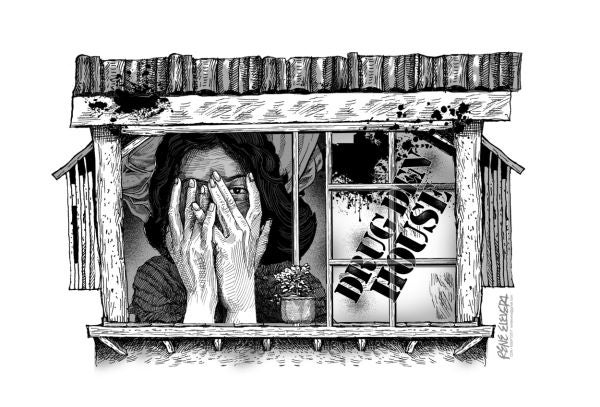 If you fail to convince drug users to end their habit, then maybe they would respond to a public humiliation campaign as Barangay Pajo Chairman Junard Chan of Lapu-Lapu City did when he revived the shame campaign initiated by former Manila mayor Alfredo Lim in his area.

Among those who were tagged as allowing their rooms to be used as a drug den was a certain Mia (real name withheld), who was humiliated by Chan after her room was spray-painted and identified as a drug den.

While she denied allowing for her room to be used as a drug den — a complaint made by her landlord who claimed that some of his apartments were used as drug dens — Mia admitted to being a drug user.

For those not willing to give her the benefit of the doubt, Chan’s action may seem justified since drug users are just one to two steps away from committing criminal acts, and allowing their homes to be used as a drug den is just one possibility.

But being a barangay official, Chan must at least have a rudimentary awareness of due process that involves allowing the accused to explain their side on the charges against them.

There was no such opportunity when Chan and his people spray-painted the rooms allegedly used as drug dens by tenants. The landlord’s word is insufficient and may even be classified as hearsay if not backed by substantial evidence against the accused.

After the embarrassment and humiliation that is the Kian Loyd delos Santos killing, one would expect that the police would be more circumspect in their war against illegal drugs.

Then again, the Lapu-Lapu City police may reason that it’s not as if they’re killing drug suspects with the shame campaign initiated by Chan, a former mayoral aspirant whose anti-drug programs of giving livelihood to drug suspects is a lot more productive.

Chan cannot justify his shame campaign — or maybe it is Lapu-Lapu City Hall’s shame campaign or how else to explain Cabagnot’s presence in last Monday’s activity — by saying that these drug users and peddlers continue to be stubborn and unrepentant in their ways.

When the Supreme Court itself ruled that the shame campaign as used by Lim or those aping him is unconstitutional, it should have been enough to remind local officials not to resort to it aside from their usual Tokhang campaign.

Shaming these users and pushers may not only earn them the community’s disgust and contempt but may also label them as ripe for summary execution by the so-called vigilantes.

TAGS: campaign, copnvince, fail, if, shame, to, you