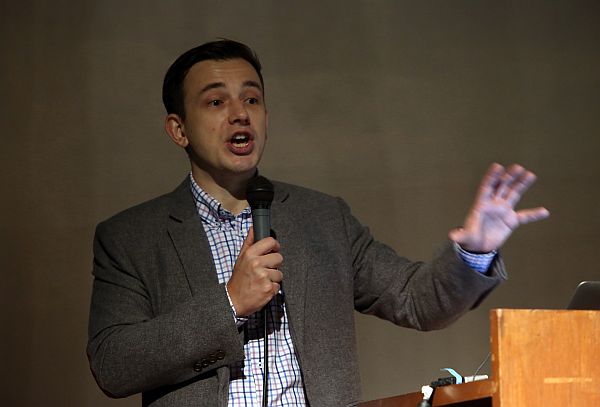 Iain Martin says trainings are essential to help netizens use the tools online to stop the spread of fake news.
CDN Photo/Junjujie Mendoza

How can ordinary folk tell the difference between fake news and factual news stories on social media?

The answer lies in equipping people with the tools to filter and delouse fake news and search for reliable, established news sources, an editor of an online news outlet said yesterday.

Iain Martin, editor of the Asia Bureau of Storyful, an online news outlet based in Ireland, told the audience in a forum titled “Tools to Ferret Out Hoaxes and Misinformation” that there are tools to spot fake news in the web.

The forum held at the Marcelo Fernan Press Center in Barangay Sudlon, Cebu City, was attended by more than 100 Mass Communication students and professionals and was organized by SunStar Publishing.

The activity is part of the series of forums and seminars for the 25th Cebu Press Freedom Week.

“We are easily fooled on social media contents due to misleading contexts. We have to make sure that these contents, it may be a piece of article, photo or video, are not placed in the wrong context,” Martin said.

While he admitted that inspecting contents over the internet is “pretty time consuming,” the Irish journalist said it’s crucial to prevent the dominance of fake news in the online realm.

“We never wanted a misinformed audience and people. That’s why we have to dig a little deeper to find out whether they are real or not,” Martin said.

Martin said one such tool is Google’s Reverse Image Search in which netizens can obtain details about a photo posted online by reuploading it to Google’s search bar.

Once uploaded, Google will generate information about the image such as the date it was uploaded, links to its duplicates present online, the location and the owner.

“All this information will help you determine the authenticity of a photo. If the photo was used to supplement a story whose dates do not coincide with the image, then chances are high that it’s fake,” he said.

Martin also suggested a manual frame-by-frame analysis of the photo to verify any irregularities.

He said netizens and journalists need training and seminars to help them use these tools to detect fake news.

SunStar Daily–Cebu Editor-in-chief Isolde Amante later called on the audience to do their part to prevent the proliferation of fake news sites.

“The time we spend on reporting the accounts of our Facebook friends who spread false information can be used instead to educate them on how to sift through what is real and what is fake,” she said.

Read Next
Tabal gets reward from Capitol