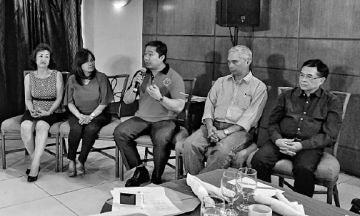 Dr. James Guardiario, thoracic and general surgeon of Chong Hua and Perpetual Succour hospital, said lung cancer is one of the deadliest type of cancer.

“Lung cancer is one of the deadliest. Eighty-five percent of lung cancer deaths are attributed to smoking and 15 percent are due to hereditary, genetic and exposure to secondhand smoke,” he explained.

Dr. Ma. Noemi Alsay-Uy, a medical oncologist of Cebu Doctors’ and Chong Hua hospital, said the immunotherapy treatment has been proven by clinical studies all over the world to add more years of survival to cancer patients.

“It has 40 percent reduction of risk of death because of the high response rate of patients, compared to the chemotherapy which has only 25 percent,” she said.

According to Dr. Uy, when patients undergo chemotherapy, there are a lot of side effects because it hits not just the cancer cells but all cells, while immunotherapy fortifies the natural healthy cells of the body to avoid malignant cells to override them and prevent the bad cells from spreading.

This year, the Pembrolizumab, a particular immunotherapy drug, was emphasized by the Philippine Food and Drug Administration as a treatment for non-small cell lung cancer (NSCLC). Those patients diagnosed with lung cancer could undergo immunotherapy instead of chemotherapy.

Dr. Guardiario encouraged the public to get themselves tested when they experience symptoms because most cancers are detected in an advanced stage.

“Most cancers are detected in a late stage, because patients get themselves checked only when they’re already feeling excessively tired, and when they start to spit blood. There is still a cure if the disease is detected early,” he said.

Diego Castro, son of the late veteran news anchor Angelo Castro Jr., shared his experience when his father was diagnosed with stage 3 lung cancer in 2008.

Castro called on the people not to hesitate to get themselves checked especially if they have a history in smoking or a family history of having cancer.

“If there’s anything I could have done to my father, I had him checked a year earlier, at least maybe at that time his cancer was still in an early stage.

Maybe his life could have been prolonged. Even if my daddy would get mad at me, I would drag him to the hospital to get him tested,” he expressed.

“My father started smoking when he was 10 years old. He quit smoking but he was still diagnosed with cancer 10 years later. If you have history, there’s no shame in getting tested. Have a healthy lifestyle, get yourself tested early and trust your doctor,” he said. Also discussed during the event was the movement “Hope from within,” a support group for cancer patients that conducted a series of educational and informational forums that focuses on the importance of early detection of malignancy.

One of the advocacies of the group is the “Test, Talk and Take Action,” a battle cry to encourage the people to take a proactive stance against lung cancer.