It felt like being transported back to your favorite “James Bond” films.

Accompanied by the Cebu Philharmonic Orchestra, the 54 candidates of Binibining Cebu embodied the theme, “Femme Fatale,” as they paraded onstage during the Evening Gown Competition held Wednesday evening, Oct. 4 at the Centerstage of SM Seaside City Cebu.

Multi-awarded furniture designer Kenneth Cobonpue, the creative producer of Binibining Cebu, thought of the concept which is not being done in other beauty pageants.

“The challenge here is that there are 54 candidates and when the pageant gets long, it becomes dragging. So, we had to mix entertainment with a show. It’s a very new concept and you don’t see this in Miss Universe. We tried to make it seamless so that the girls also become part of the performance,” Cobonpue told Cebu Daily News.

Thus, all throughout the competition, there were vocal and dance performances, all accompanied by the Cebu Philharmonic Orchestra, conducted by Maestro Jiovanni Tabada.

They performed the following songs, all culled from iconic “James Bond” films throughout the years: “Diamonds are Forever,” “From Russia with Love,” “Golden Eye,” “View to a Kill,” “For Your Eyes Only,” “Gold Finger,” “The World Is Not Enough,” “Live and Let Die,” “Skyfall,” and “Die Another Day.” “Overall, it is a different standard, it is almost like national.

Fifty-four candidates are very hard to get,” Cobonpue said.

(CDN PHOTO/ Xavier Solis)The Evening Gown Competition comprises 25 percent of the overall judging criteria that will determine the pageant’s top 20 to be announced on the pageant night on Oct. 28. 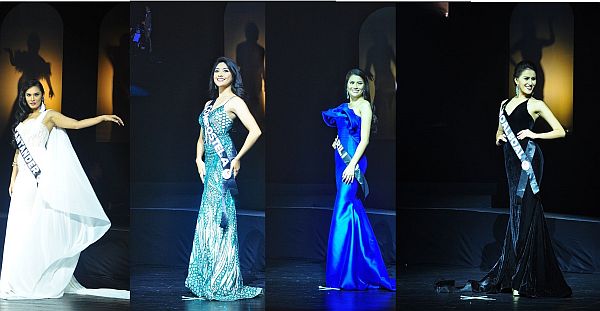 Cobonpue said the 54 candidates would be judged based on how they carried their gowns. “I think we have to up the level in terms of fashion design, I think. There’s a lot of gowns but I think it can be done better. I always like simpler.

I think we are still in the stage na we like so much glitter ba, kaning shine. I think we have to really go back to the simple. The best dresses here were the simple ones.

It brings out the figure of the women,” Cobonpue added. After the Evening Gown Competition, the ladies will next go through the Pre-pageant Interview to be held at the Mandani Bay Show Gallery on October 25.

And on Oct. 28, the first ever Binibining Cebu will be crowned at the Pacific Grand Ballroom of the Waterfront Cebu City Hotel and Casino.