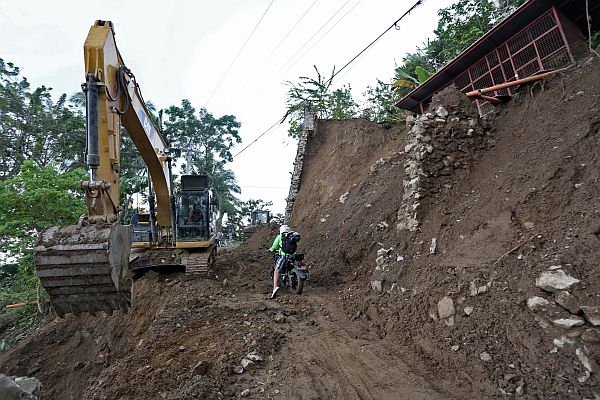 Cebu City suffered floods and massive traffic gridlock due to the heavy rains on Friday afternoon.

According to Cebu City Disaster Risk Reduction and Management Office (CCDRRMO) head Nagiel Bañacia, flash floods were experienced mostly in the North Reclamation Area (NRA) and areas near the sea.

“It’s because it was also high tide when it rained that’s why there were floods in certain areas,” he said in an interview.

The rains only lasted for around 30 minutes, though, he added.

The floods also caused traffic gridlock past 2 p.m. in the NRA.

Traffic is usually heavy during Fridays and was worsened by yesterday’s rains which also inundated the downtown areas.

With a forecast of a rainy weekend, Bañacia advised residents, especially those near hazard and danger zones, to start applying precautionary measures.

“While we still have good weather, take the time to already make precautionary measures like conducting repairs and other mitigating measures,” he said.

Meanwhile, barangay officials and owners of establishments in Sitio Graje, Barangay Busay, have continued constructing a riprap to prevent more landslides in the area.

According to Busay Barangay Councilman Kevin Sanchez, the road leading to popular tourist sites like Temple of Leah, Mountain View Nature’s Park and Lantaw Restaurant has been cleared and is already passable as of Thursday evening.

Despite yesterday’s rains, no incidents of landslides were reported in the barangay.

However, during the work on the riprap for the road leading to the establishments, Sanchez said portion of the soil would still erode when heavy equipment like a backhoe is used in taking out debris.

Sanchez said this is because the soil is still soft from the rains.

“So we will probably advise the owners of the establishments, who are doing the riprap, to temporarily suspend the construction. We are concerned that rocks and more debris will fall,” he said.

He added that personnel from the Department of Public Works and Highways (DPWH) provided support on Thursday and yesterday during the clearing operations in the area.