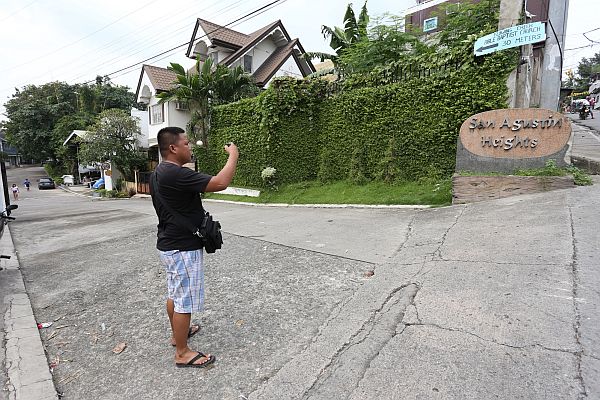 A police officer surveys the crime scene as he looks for evidence in the shooting of a businessman in San Agustin Heights, Barangay Tisa, Cebu City.
CDN PHOTO/JUNJIE MENDOZA

The Cebu City Police Office is looking into all possible angles, including an alleged involvement of illegal drugs, in a strafing incident that injured a businessman near a subdivision in Barangay Tisa, Cebu City, on Friday dawn.

Vincent Rojo, an owner of a cockpit arena in Carcar City, sustained several gunshot wounds when an unidentified man fired shots at him past 12 midnight outside the San Agustin Heights in Barangay Tisa.

CCPO Homicide section chief SPO4 Alex Dacua said their initial investigation revealed that Rojo was on board a vehicle parked outside the gate of the subdivision when a motorcycle-riding man strafed his vehicle.

“There is an intent to kill since we recovered more than 10 slugs. The victim was lucky to have survived the attack,” Dacua said.

The police were able to recover at least 18 slugs from an M16 rifle at the crime scene. The windshield of Rojo’s car was shattered into pieces.

The Homicide section said that the victim is now recuperating in a private hospital. But he has refused to cooperate with police on the investigation.

Senior Supt. Joel Doria, CCPO director, said that they are looking into all possible motives of the incident.

“Ang alam natin businessman siya. Tingnan natin lahat ng angulo kung ano ang posibleng motibo (What we know so far is that the victim is a businessman. We will study all angles on the possible motive),” Doria said.

Doria added that police are also considering the possible involvement of illegal drugs.

“We will conduct background checking on the victim,” Doria added.

A source from an anti-narcotics agency told Cebu Daily News that Rojo is suspected to be a big-time player of illegal drugs.

The official said that they have been monitoring Rojo for quite a while now.

But the anti-narcotics official added that they believe Rojo is still active in his illegal drug trade.

Read Next
11 cops with pending cases assigned to traffic duties