DEATH IN THE HANDS OF TANODS 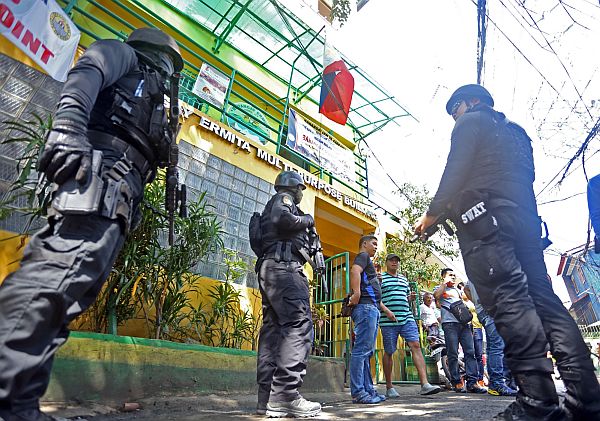 KILLED. Cebu City Police Office SWAT personnel arrive at Ermita Barangay Hall on the morning of Tuesday, October 10, 2017, following the death of a burglary suspect in the hands of barangay tanods shortly before 1 a.m. of the same day. (Below) The body of the victim, Lendon Abadinas, 36, shows handcuff marks on his left wrist.
CDN PHOTO/LITO TECSON AND TONEE DESPOJO

Ermita barangay tanods involved in the suspicious death of a burglary suspect face investigation from the police for a possible homicide case, and from the Commission on Human Rights

While most people were asleep past midnight on Tuesday, 36-year-old Lendon Abadinas was being escorted by at least three barangay tanods (village watchmen) out of the Ermita Barangay Hall’s detention cell to the Carbon Police Station, six hours since he was arrested for alleged burglary.

Just five steps from the village hall, bursts of gunfire were heard by the other detainees.

Abadinas, a resident of Barangay Pardo in Cebu City, was hit on his right chest.

Although he was grimacing in pain, Abadinas, whose mouth was gagged with tape and his hands bound by handcuffs, managed to run and seek assistance from the Carbon Police Station, about a hundred meters from the barangay hall.

“Accordingly, he managed to tell the police that he was shot by a barangay tanod,” said Senior Supt. Joel Doria, director of Cebu City Police Office, in an interview on Tuesday.

Operatives of the Carbon Police Station immediately rushed Abadinas to the Cebu City Medical Center (CCMC) but was declared dead on arrival by the attending physician.

Some seven hours after the incident, at around 8 a.m. yesterday, Ermita barangay tanod Junniel Sanchez voluntarily surrendered to police investigators who were at the barangay hall. He admitted he shot Abadinas but insisted he just tried to protect himself after the burglary suspect allegedly tried to take his gun that was tucked in his waist.

Another village watchman, Jerome Miral, surrendered to the police at past 3 p.m. to clear his name. He confessed putting a masking tape on the mouth of Abadinas, who allegedly tried to make a “noise barrage” inside the detention cell of Barangay Ermita shortly after he was arrested at around 6 p.m. on Monday.

He, however, denied killing the detainee, who had bruises on his face.

The other barangay tanod who took Abadinas from the detention cell of Barangay Ermita remained unidentified as of Tuesday evening.

Both the Cebu City police and the Commission on Human Rights in Central Visayas (CHR-7) were looking into the incident as it was possible that Abadinas was intentionally killed.

Doria said he immediately ordered police probers to find out how Abadinas was killed.

While barangay tanods are allowed to arrest suspected criminals, Doria said they are not allowed to detain the persons they arrested.

“They (barangay tanods) should have immediately turned over the detainee to the police,” he said.

CHR chief investigator Leo Villarino shared the same sentiment as they launched a probe against the barangay tanods who arrested and took custody of Abadinas.

“We will surely conduct investigation on this case. How come the victim was placed under the custody of the tanods?” he told Cebu Daily News.

Police investigators secured at least two witnesses who were also detainees at the detention facility of Barangay Ermita.

One of the witnesses, in an interview, said a barangay tanod woke them up at around midnight and pulled Abadinas out of the detention cell.

“Giposasan to nila siya patalikod unya gi-scotch tape ang iyang baba (They placed his hands at the back and handcuffed him. They also put a scotch tape on his mouth),” said the detainee, who requested anonymity for security purposes.

Another detainee said they saw how Miral mauled Abadinas and dragged the latter outside the barangay hall.

The two witnesses said Abadinas was never noisy inside the detention cell, contrary to the claim of one of the barangay tanods.
“Sige ra man gani to og hinuktok. Pirmi walay gana mokaon (He was very quiet and did not even want to eat),” they said.

Sanchez, however, insisted he shot Abadinas out of self-defense.

“Nag-ilugay na mi sa armas tungod sa barangay hall. Natumba ko wala na ko nakabantay nga nabuthan siya. Nidagan siya pagkahuman. (We grappled for the gun. I fell down, and I did not realize he had been hit. He ran away after he was hit),” he said in an interview.

Sanchez said he had no intention to kill the victim and even decided not to give chase when Abadinas ran away.

“Wala ko nigukod niya. Nahadlok pud ko niuli ko sa amo (I did not chase him. I was afraid, so I went home),” Sanchez said.

Sanchez surrendered to the police after learning that Abadinas died at the hospital.

Although barangay tanods are prohibited from carrying guns, Sanchez said he carried with him a .45 caliber gun to protect himself from aggressors especially that Barangay Ermita is considered a hotspot for illegal drugs by the Philippine Drug Enforcement Agency.

Miral, for his part, said he was not present when Abadinas was escorted from the Ermita detention cell to the Carbon police.

He said he only arrested Abadinas but went home after the latter was locked inside the barangay hall’s detention cell.

Sanchez and Miral are now detained at the CCPO stockade pending the filing of a homicide case against them at the Cebu City Prosecutor’s Office.

Supt. Ryan Devaras, chief of the Investigation and Detection Management Branch (IDMB) of the CCPO, said Sanchez is not authorized to carry and own a gun.

But he said some of the tanods might have decided to bring firearms to protect themselves.

Under the law, Rupinta said only barangay captains are allowed to bring firearms.

“Wala ko kahibawo nga naa na silay (tanods) armas. Pero karon ato na na pamawion ilahang armas (I did not know that they bring firearms with them. But now, I will confiscate their guns),” Rupinta said.

TAGS: death, hands, in, tanods, THE