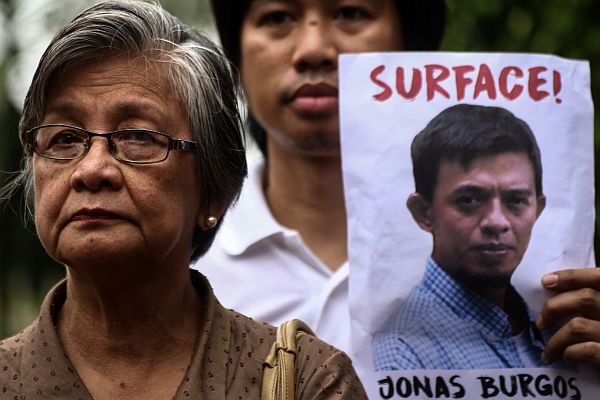 Edita Burgos, the mother of the abducted activist Jonas Burgos, is present in the promulgation of her son’s case at the Quezon City Regional Trial Court Branch 216.
/Inquirer photo

In a nine-page decision, presiding Judge Alfonso C. Ruiz II of QCRTC Branch 216 absolved Philippine Army Major Harry Baliaga Jr., who was charged with arbitrary detention, as the prosecution failed to prove that he was the person behind the disappearance of Burgos in 2007.

The court said the evidence presented by the prosecution was based on hearsay and not on the witnesses’ personal knowledge.

It also ruled that there was no sufficient circumstantial evidence to prove the guilt of Baliaga, who is out on bail.

“The only circumstantial evidence presented by the prosecution was the discovery that the vehicle, with plate no. TAB-194 was earlier apprehended and later impounded at the 5th Infantry Battalion located at San Mateo, Norzagaray, Bulacan, where the accused, Harry Baliaga, Jr., was previously assigned,” the decision stated.

“Even if admitted, however, the circumstantial evidence standing alone will not reach the quantum of proof required to overcome the constitutional presumption of innocence,” it added.

Burgos, an organic farming trainer, was last seen alive on April 28, 2007 when unidentified men forcibly took him from inside a mall in Quezon City into a vehicle.

Burgos’ mother, Edita, said she was saddened by the court’s decision but maintained that their family will continue to search for justice for his son, who remains missing until now.