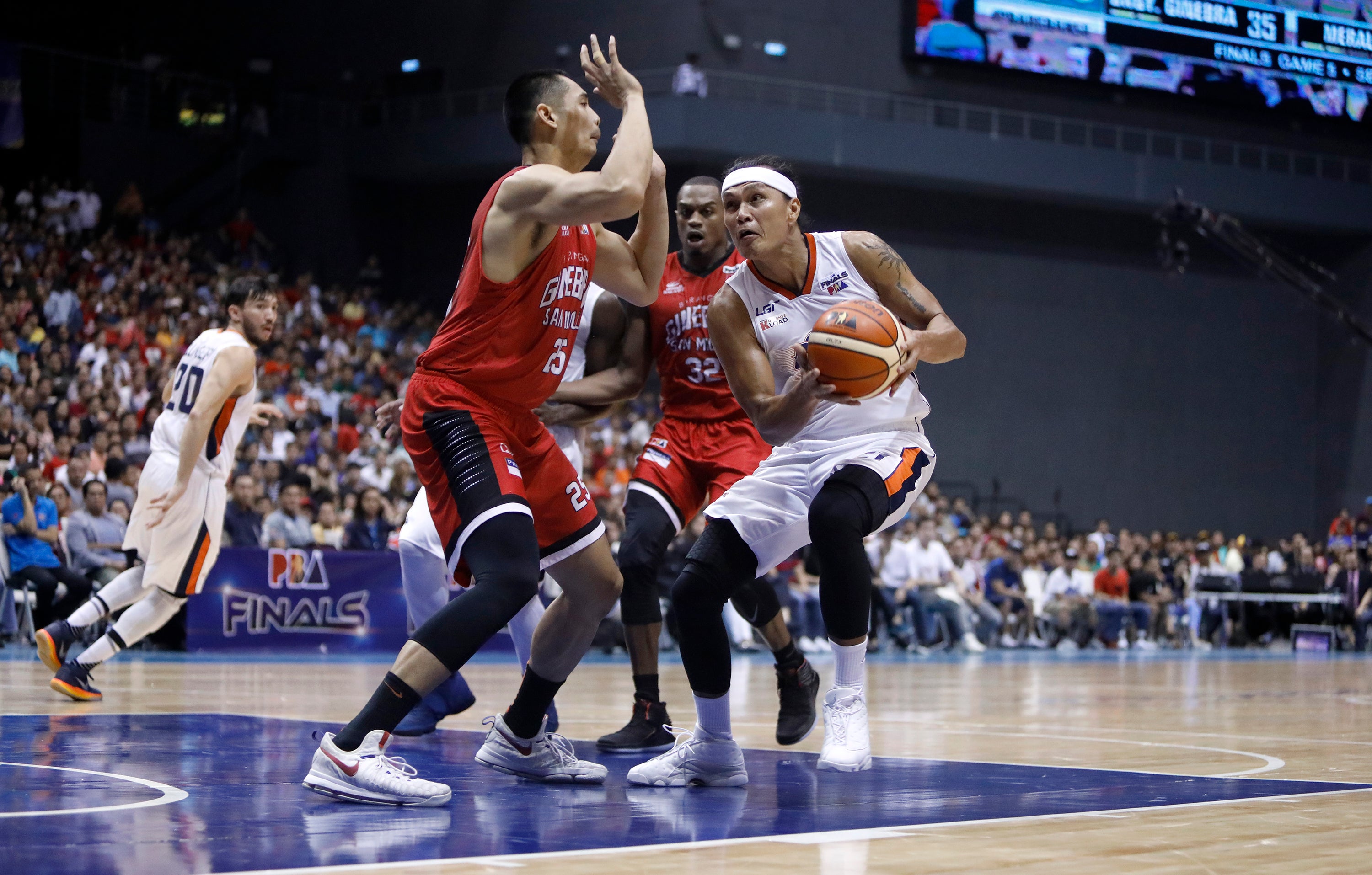 Reynel Hugnatan of Meralco is defended by Ginebra’s Japeth Aguilar in Game 5 of the PBA Governors’ Cup Finals at the Philippine Arena. (PBA Image)

Bocaue, Bulacan – Facing a very determined foe in a battle of attrition where neither side was willing to budge an inch, Barangay Ginebra was efficient in the stretch, and just like that, swung the pendulum of momentum its way in the PBA Governors’ Cup title series.

The Gin Kings bounced back after losing the previous two games, shutting down Meralco when it mattered to pull out an 85-74 victory and take a 3-2 edge in the best-of-seven series before an all-time Finals record of more than 36,000 fans at Philippine Arena here.

Greg Slaughter and LA Tenorio, missing entities for the Kings in the last game, came out and asserted their identities early as Ginebra built an 18-point lead in the first half before finishing off a Bolts with a flurry in the end game to earn two match points of completing a repeat.

But coach Tim Cone said that, at this point, they would like to think of playing just one more game and not allow this thing to go to a decider.

“It doesn’t win us anything, but in a best-of-three series, it’s important for us to win the first game.” Cone said. “You got to go out for a win (in this game) so you can dictate the next two games.

“But our mentality right now is we want to play just one more game,” added the winningest coach of all-time. “We’ll worry about Game 6 in an hour. Right now, we want to thing (and enjoy) this one.”

Slaughter challenged every shot inside and fought hard for every rebound he could get involved in, while Tenorio came back from a scoreless Game 4 to jumpstart the Ginebra offense with nine first quarter points that got the Kings off on the right foot.

Ginebra built an 18-point lead but found itself in a dogfight in the third quarter with the Bolts, who connected from afar to even take the lead a couple of times.

But when the going was at its toughest, Tenorio and Slaughter got all the help they needed from the others as the Kings held Meralco to two Allen Durham free throws for more than five minutes near the end of the contest to pull away.

“We just didn’t battle, we went to war,” Cone said with pride. “It was crucial we stopped the momentum they were getting and making sure we got back on track. We played to our identity this time and took away some of their strengths.”

The potential title-clinching game is slated Wednesday also here, and import Justin Brownlee said that he would be ready to do whatever it takes to win as he reprises his role as last season’s hero that ended Ginebra’s eight-year wait for a championship.

“Our job’s not done yet,” Slaughter, who finished with 17 points, 15 rebounds and five blocks, said. “We’re going to be ready to play a bigger game.”

Tenorio also had 17 points and played extended minutes with Sol Mercardo out because of an ankle injury.

Ginebra’s defense allowed Durham just four fourth quarter points. The reigning two-time Best Import scored 11 of his 27 in the third that towed the Bolts back in the game.