Marawi siege is over 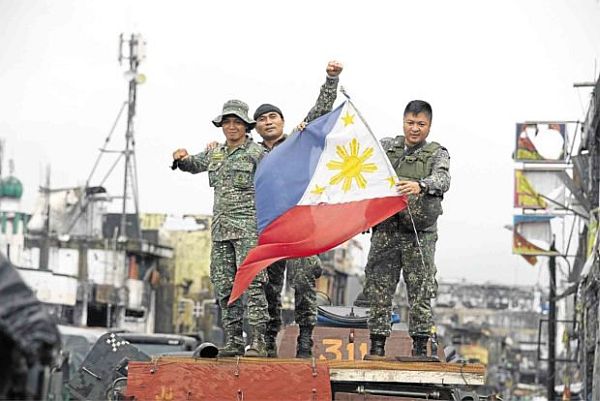 Waving a flag, soldiers aboard an armored personnel carrier celebrate their victory amid gunfire and explosions in Marawi City.
/AFP

Malacañang on Monday called on Filipinos to unite as the government starts the “challenging task” of rebuilding Marawi City, which had been under siege for exactly five months.

Presidential Spokesperson Ernesto Abella made the statement as the military announced the fighting in Marawi ended on Monday.

“The defeat of the Daesh-inspired Maute Group likewise underscores our singleness of purpose in the global war against terrorism,” Abela said.

The government, he said, was now focused “to the enormous and challenging task of rebuilding, reconstruction and rehabilitation of the Islamic City.”

“The damage to Marawi’s infrastructure and private properties and the displacement of thousands of residents require the government’s unified and comprehensive effort; thus, we call on all our citizens to come together to move our country forward towards a peaceful, prosperous and secure future,” he said.

“We have successfully concluded what has been, so far, the most serious threat of violent extremism and radicalism in the Philippines and in Southeast Asia,” he added.

The Palace official commended the “government troops, including the fallen, for their courage, gallantry, and sacrifice.”
“A snappy salute to all of you,” he said.

“After 154 days of siege in Marawi with Daesh-inspired Maute-ISIS group, after a week the commander-in-chief declared the liberation of Marawi City, we now announce the termination of combat operations in Marawi City,” Lorenzana told reporters on Monday.

The announcement came on the sidelines of the Asean defense ministers meeting (ADMM), a high-level regional security forum among member nations, being held in this former American air base in the country.

“The Philippine forces, aided by its government and the massive support of the Filipino people, have nipped the budding infrastructure and defeated terrorism in the Philippines,” the defense chief said.

The combat operations were ended after terrorists tried to make their last stand inside the main battle area.

Government troops found 42 cadavers of suspected terrorists in two buildings and a mosque in the center of the clash.

“There was a firefight and they were finished,” Lorenzana said, adding all remaining hostages have been recovered the past few days.

“We conducted mopping up operations. The presence of Maute-ISIS is confined in two big buildings and one is a mosque. That is where the last fighting occurred,” he said.

Col. Romeo Brawner Jr., the deputy commander of the Joint Task Group Ranao, said retrieval of the bodies continued from the building that served as the terrorists’ last stronghold.

Marawi and Lanao del Sur officials said they welcomed the good news as it would pave the way for the rehabilitation works to formally start.

“It was a big relief for the people of Marawi City, who have (long wanted) to return,” said Marawi City Mayor Majul Gandamra.

He said they did not have any idea that the government would declare the formal end of the fighting on Monday because he was just talking to military officials earlier in the day and nothing of this sort was mentioned to him.

“We were at the city hall for the flag raising ceremony and all I was told about was that 20 hostages will be turned over to the local government unit.

What they told me earlier was that there was only one building remaining. Now the Secretary of Defense (Lorenzana) had already made the announcement so I am sure the war is over,” Gandamra noted.

TAGS: is over, marawi, siege