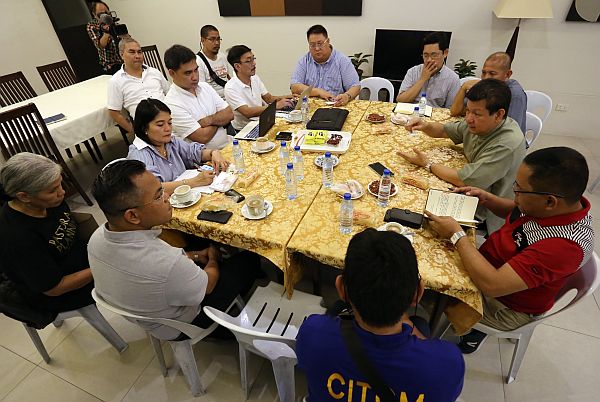 The funeral of Archbishop Emeritus Ricardo Cardinal Vidal will be simple yet rich in meaning.

Members of the clergy and religious organizations who played significant roles when Vidal was archbishop of Cebu for 29 years will have special tasks to perform in Thursday’s liturgy which is expected to draw thousands of people from the different parts of the country.

Security will be tight, said Police Regional Director, Chief Supt. Jose Mario Espino, adding that at least 300 policemen from the Cebu City Police Office will be deployed on Thursday, October 26 when Vidal will be laid to his final resting place.

“It is expected that there will be dignitaries, VIPs (very important persons) who will be coming in. That’s the reason why we will put appropriate security,” Espino said.

The streets around the Cebu Metropolitan Cathedral will be closed to traffic, as Vidal’s remains will be brought around the area before his burial at the Cathedral mausoleum located at the back of the church.

Davao Archbishop Romulo Valles, the incoming president of the Catholic Bishops’ Conference of the Philippines and Msgr. Gabriel Viola, secretary of Papal Nuncio Gabriele Giordano will also be present.

Msgr. Joseph Tan, spokesperson of the Archdiocese of Cebu, said they are expecting about 500 priests from different parts of the country, particularly from Marinduque, Lipa City, Malolos and Lucena City — places where Vidal used to be assigned — to attend the funeral Mass.

“We regret to inform the public that the main pews in front and the side of the altar are reserved for the priests. The public, however, can stay at the balcony and the rear pews inside the cathedral,” he said.

Large LED screens will be mounted inside and outside the church compound to allow the people to view the funeral Mass and burial.
The liturgy will also be aired live over the Cebu Catholic Television Network.

At the start of Mass, a large white cloth or “pall” will be laid on Vidal’s coffin by four priests who were given the title of “monsignor” during his stint as cardinal.

The white cloth recalls the baptismal garment as a sign of Christian dignity which must be unstained into the everlasting life of heaven.

“We are clothed with the armor of the Lord as we go to heaven,” said Fr. Mhar Vincent Balili, one of Vidal’s former secretaries and a liturgist of the archdiocese.

Vidal’s younger brother Juanito will lay the crucifix on top of the casket while Fr. Benedict (religious name) of the Society of the Angel — a congregation that assisted Vidal during liturgical celebrations — will put the Book of the Gospels on the coffin.

Fr. Glenn Therese Guanzon, chairperson of the Commission on Worship, said Vidal’s coffin will not be placed on a bier or stand, and will instead be positioned on the ground.

“That is to symbolize the abasement of the ‘earthly man’ and a sign of humility before God,” he explained in a press conference yesterday.

A nun of the Missionary Catechists of St. Therese will read the first reading; the responsorial psalm will be sang by a seminarian, while the prayers of the faithful will be read by representatives of the different local religious congregations.

Hymns during the funeral Mass will be sang by the San Carlos Seminary College Choir led by renowned composer and musician, Msgr. Rodolfo Villanueva.

After the Mass, Vidal’s coffin will be placed on a carroza and will be brought out for a procession along P. Burgos Street, Osmeña Boulevard (near the Basilica del Sto. Niño), D. Jakosalem Street and P. Gomez Street where the cathedral mausoleum is located.

Nagiel Bañacia, City Disaster Risk Reduction Management Office head, reminded the public not to bring their vehicles near the Cathedral as it will be closed to traffic.

He said the public can park their vehicles at Compania Maritima or Plaza Independencia.

“We will also clear the funeral procession route from vendors to give people enough space during the event,” said Bañacia.