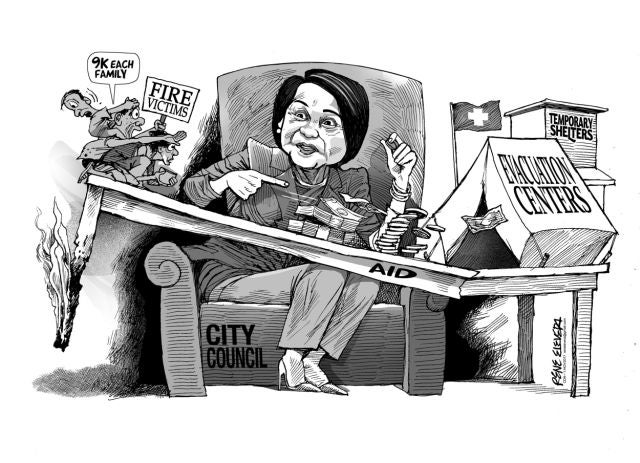 A proposal to allocate an additional P9,000 cash aid to fire victims in Cebu City met mixed reactions from officials who either saw it as too much or just right for the intended beneficiaries.

In opposing the P9,000 cash aid, Councilor Margot Osmeña said the city can build evacuation centers that can temporarily house the victims and it’s more practical than having to give them cash which they can spend on other purposes.

The councilor said this would prevent the victims from being “too choosy” since they usually refuse to stay in identified relocation sites owing to the lack of access to water and power.

What is important to note is that even if the city gives P9,000 to each beneficiary, what’s to prevent them from complaining loudly about the city’s lack of assistance to them even if they were given P20,000 on top of the additional P9,000 cash aid?

There is also the question of what to do with evacuation centers when there are no fire outbreaks that would necessitate its use. How much was spent to build previous evacuation centers and are they ill equipped to house the settlers, hence their decision to build makeshift shelters as they wait for the go signal to rebuild their homes?

How much would it cost to maintain them and what’s the assurance that the families will be prudent in using these facilities while the city decides whether to allow them to rebuild their homes or to send them back to their provinces?

While local governments and the national government should extend assistance to fire and calamity victims, a measured response should be taken in order not to deplete existing resources.

Most of the fire victims are settlers who either don’t have titles or rent houses that had seen better days and are usually in fire zones or areas that are quite vulnerable to fire outbreaks.

Thus, they know the risks they took and the dangers posed to their safety and the safety of their loved ones and belongings and should therefore be rigorously trained and oriented to observe the most basic fire safety measures.

Even then, there’s no 100 percent guarantee, given their living conditions, that they can avoid a fire outbreak.

At this point, a properly built and maintained evacuation center is the most cost-effective safety net for fire victims, who shouldn’t demand for what they want from a city government that also has other pressing priorities to attend to.

At the same time, the evacuation center should at least be minimally functional that it can provide shelter, adequate power, water and facilities for them to stay in in order to avoid inconveniencing students and those using barangay facilities.

This goes not only for Cebu City Hall but other local governments that have to provide help without having to allocate and sacrifice other necessities for other sectors.