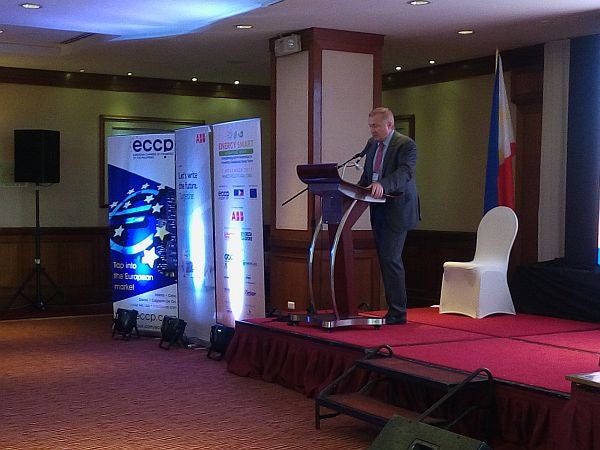 The government is encouraged to reduce red tape to make it easier for businesses to invest in the country’s energy sector.

Guenter Taus, European Chamber of Commerce of the Philippines (ECCP) president, said that the Philippine government would need to find a way to make it easier for businessmen to invest here, particularly in the power sector.

“If you want to put up a power plant, you still need 160 signatures. The government needs to make sure that the companies can be established and that they can implement what needs to be implemented,” Taus told reporters on the sidelines of Energy Smart Visayas 2017 at Marco Polo Plaza Cebu on Tuesday.

Now on its fourth year, Energy Smart Visayas highlights the growing partnership of the European Union and the Philippines in promoting a sustainable energy future for the country.

Taus said that for many years, the EU has been actively supporting the Philippines in engaging stakeholders toward creating and implementing policies and programs that provide increased efficiency in energy use and renewable energy development.

The EU has allocated an indicative amount of 190 million euros from its cooperation budget of 325 million euros for job creation including renewable energy between 2014 and 2020.

EU ambassador Franz Jessen, in earlier reports, said that the EU continues to be the largest investor for renewable energy in the Philippines.

They reported a record high P90 billion (1.74 billion euros) in energy sector investments two years ago, which forms 37 percent of the EU’s total investment in the Philippines during that period.

Streamlining business processes in government is among the Duterte administration’s 10-point socioeconomic agenda.

Taus said that while he has heard that in some places it will take businessmen only three days to get a business permit, he has yet to experience that for himself.

“You still get the usual run-around. You don’t get anywhere. You still need to secure permits here and there. I think the advertised online registration with all permits still has a long way to go,” he said.

The ECCP president warned that as the Asean integration becomes more apparent, the Philippines will likely face stiffer competition among its neighbors in the region.

“If we can’t get our act together, investors will go somewhere else. We need to make sure we understand what we are doing and we’re doing it properly,” Taus added.

Aside from facilitating the entry of renewable energy investments into the Philippines, the ECCP is also pushing for reforms in legislation that will help industries be more efficient in their operations through energy-saving technologies.

It has been closely working with the Philippine Economic Zone Authority to grant economic zone locators tax incentives when importing products that will help them save on energy.