The oil of the senses 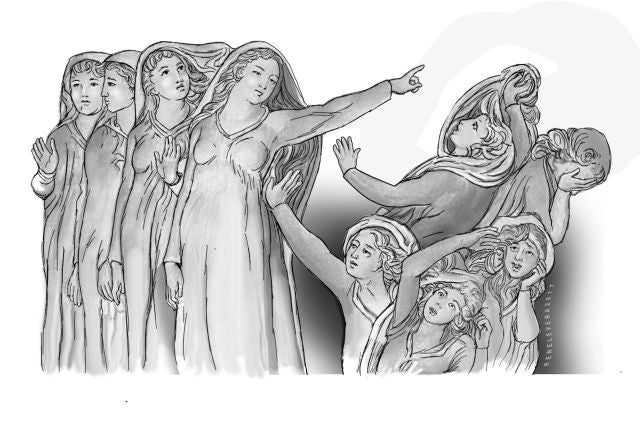 I have always looked on William Blake as a poet. In fact, he was more than that — he was likewise an artist, one that art critic Jonathan Jones considered “far and away the greatest artist Britain has ever produced.”

Among his artistic works is “Wise and Foolish Virgins,” a gouache watercolor painting. Years ago, the wife and I chanced upon this painting in the Tate Gallery in London.

The painting interprets the parable told by Jesus as narrated in the Gospel of Matthew. Jesus compared the kingdom of heaven to ten virgins who were to meet the bridegroom with their lamps. Five of them, whom Jesus described as foolish, brought no oil, unlike the other five, the wise ones, who had oil flasks with them.

The bridegroom took a long time to arrive. Drowsy from waiting, the virgins fell asleep. At midnight, a voice announced the bridegroom’s impending arrival, which sent the virgins scrambling for their lamps. The foolish ones begged of the wise to give them some of their oil because their lamps were going out, but the latter, fearing that there might not be enough for all of them, suggested that they go to the merchants instead to buy oil. While the foolish virgins were out, the bridegroom arrived and the wise ones went to the wedding feast with him and the door was locked.

When the foolish ones came, they asked to be allowed in, “Lord, Lord, open the door for us!” But he said, “Amen, I say to you, I do not know you.”
The parable ends with this admonition, “Therefore, stay awake, for you know neither the day nor the hour.”

In his painting, Blake portrays the five wise virgins pointing to the outside, directing the foolish ones to buy oil from the merchants. The wise virgins, white and radiant, stand in a line, holding their lamps, ready to join the wedding party. Their foolish companions are of a darker shade and look unsettled.

Apparently, in the time of Christ, betrothals lasted for about a year, during which the prospective groom busied himself with preparations for the wedding. When the time arrived, he would go to the girl’s house to fetch her and her family and friends and entourage and take them in a torch parade to the place of the nuptials and celebration. Obviously, the virgins in the parable were part of the entourage.

Jeremiah uses the image of marriage to portray the union of God and His people. Revelation mentions a wedding feast, that of the Lamb (Christ) and his bride (the church).

Jesus describes the Kingdom of Heaven as a wedding banquet, the celebration of the mystical marriage between Christ and his church, in which every baptized person participates, and of which, in the Sacrifice of the Mass, the Eucharist — the eating and drinking of the body and blood of Christ in the form of bread and wine — is both a taste and foretaste.

We do not know when Christ will come in glory, when the eternal marriage supper of the Lamb will take place. Hence — and this is the point of the parable — we must stay awake and keep our lamps trimmed and oiled.

Origen refers to the five senses as the five virgins who must all be wise, whose lamps must be constantly filled with that oil, the Word of God. Origen urges us to meet the bridegroom with light, with all the lamps of our senses illuminated.

Many people considered William Blake crazy. He certainly had queer ideas — he attacked orthodox Christianity, allegedly for discouraging earthly pleasures. He considered imagination as “the body of God.” On Blake’s claim of seeing visions, William Wordsworth commented, “There was no doubt that this poor man was mad, but there is something in the madness of this man which interests me more than the sanity of Lord Byron and Walter Scott.”

In tune with his visions, Blake said that he was inspired by archangels. Which is perhaps why he included one in his painting of the virgins. Whether or not he drew the archangel from life, we may never know. But definitely he got it right — the reference in the parable to the moment of judgment, which the archangel is announcing with his trumpet.

Read Next
The Asean way