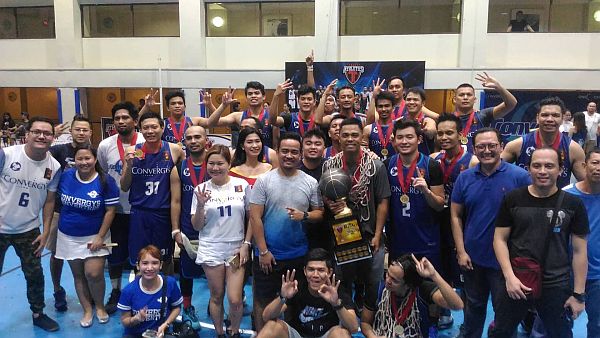 Representatives from Cebu City Marriott Hotel and Tanduay Athletics award the Elite trophy to the Convergys Converters after their victory over Teleperformance.
contributed

CONVERGYS captured their third straight Elite division title in spectacular fashion as Admir Batiancila banked in a floater as time expired to give the Converters a thrilling 58-57 win over the Teleperformance All Stars in the deciding Game 3 of the Tanduay Athletics E-Leagues for Basketball Season 13 at the City Sports Club-Cebu gym last Saturday.

The victory secured the rare “three-peat” for Convergys but it had to earn it the hard way as it trailed, 56-57 with 3.4 seconds left after Teleperformance’s Rahne Laborte completed a three-point play.

The title hanging in the balance, the Converters in-bounded the ball to Jeyson Goden, who then shoveled it to Jaime Pacquiao.

Pacquiao drove to the basket but kicked the ball out to Batiancila on the right wing. He then dribbled it in before lofting it up off the glass and into the basket as the final buzzer sounded to give the Converters the pulse-pounding win.

Former Cebu Institute of Technology-University standout Sherwin Resilla scored 20 points and pulled down 11 boards, and was named as the Finals MVP.

Teleperformance immediately filed a protest on the contention that the timer did not immediately start, allowing Convergys to complete the play in more than 3.4 seconds.