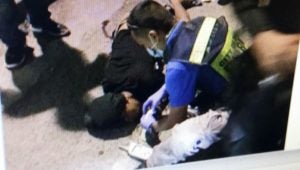 CEBU CITY—A lone gunman shot dead an alleged drug peddler while the latter was heading home about 10 p.m. on Wednesday in Barangay Lawaan, Talisay City, about 12 km south of here.

Marlon Randoy, 28 and a resident of Barangay Maghaway in Talisay, was driving his motorcycle when he was shot in the head along the national highway by an unidentified assailant who was riding on a separate motorcycle.

The police later found three spent shells in the crime scene. A loaded pistol was found tucked on Randoy’s waist.

He said a text message found in Randoy’s cellular phone showed that the victim had a fight with someone whom the police declined to identify pending investigation.

Illustrisimo said the text message read: “Mag-unay na lang ta ani (We would end up fighting each other).”