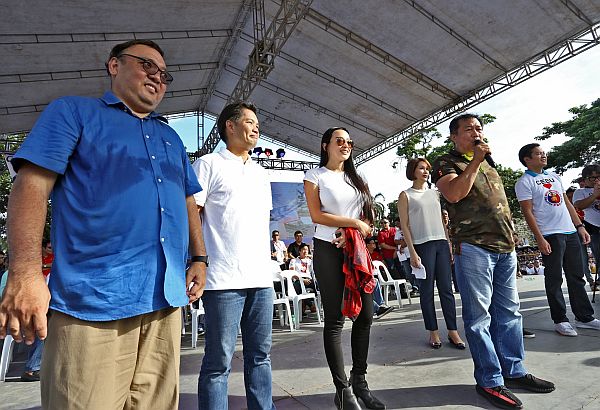 How does Senator Mocha sound to you?

If House Speaker Pantaleon Alvarez can have his way, he wants Assistant Secretary Mocha Uson of the Presidential Communications Operations Office (PCOO) to be one of the senatorial candidates of the Partido Demokratiko Pilipino-Lakas ng Bayan (PDP-Laban) for the 2019 elections.

In a speech during the oath taking of new PDP-Laban members in Cebu yesterday, Alvarez said he endorsed Uson as among those whom he wanted to be included in the senatorial lineup of the ruling party.

“Karong hapona akong giuban ang among mga kaubanan nga gusto nako ipadala didto sa hawanan sa Senado aron sa ingon mopaspas ang ilang trabaho (This afternoon, I brought our colleagues whom I want to send to Senate so that their work will be faster),” he told a crowd of about 50,000 gathered at the Plaza Independencia.

The last person he called was Uson whom Alvarez described as the “taga-depensa (defender)” of President Duterte.

The crowd broke into applause as Uson, clad in white shirt and tight-fitting black jeans joined Alvarez and the five others on stage.

Asked later about the possibility of running as senator, Uson said she would leave the decision to President Duterte.

“I was invited here by Secretary (Michael) Dino (presidential assistant for the Visayas) to attend this event and I wanted to see for myself kung gaano karami ang nagmamahal kay (how many Cebuanos love) President Duterte,” she said.

However, hours after the event, Uson posted on her official Facebook page a statement clarifying that she does not have any plans of running for senator since she is not a politician.

(That’s why I’m surprised about the reports that Speaker Alvarez announced that I’ll be running as senator. I don’t know anything about this and we did not even discuss this. It is true that I’ve been invited earlier by the Speaker to run as a senator and my answer is that I don’t have any plans to run since I’m not a politician).

She, however, said that if President Duterte, himself, would instruct her to run, then she would be willing to vie for a Senate seat.

She said her aim if ordered to run by President Duterte would be to serve the Duterte administration and the country.

(And if ever I’ll run, this is because it’s President Duterte himself who asks me to. This is so because my only aim here is to help the Duterte Administration and serve the country).

Uson, leader of an all-female dance group called Mocha Girls, was Duterte’s staunch supporter on social media when the then Davao City mayor ran for president in 2016.

The entertainer-turned-blogger was first named board member of the Movie and Television Review and Classification Board (MTRCB) before she was appointed as assistant secretary under the PCOO. /With a report from Correspondent Morexette Marie B. Erram