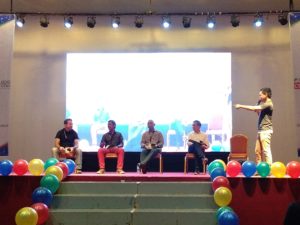 What qualities are sought for by companies when hiring programmers?

These are some of the questions raised during the 5th Developers Fest spearheaded by online search giant Google in its GDayX Cebu 2017 event held at JCentre Mall in Mandaue City, last Saturday Nov. 18.

Organized by volunteers of the Google Developers Group (GDG) and Google Business Group, the event is also supported by Google, Accenture and the Department of Trade and Industry (DTI).

About 1,180 participants composed of professional developers, entrepreneurs, and students attended the DevFest which carried the theme “Empowering Developers and Entrepreneurs.”

During a forum, veteran programmers said qualities like curiosity and a passion for learning as well as a solid skill set were among those sought by IT chiefs in rookie developers.

“Number one is that they ask questions, and know the technology . . . It tells me that they are interested in what we are doing,” Belmer Salonoy, a panelist and a developer in DN Micro said.

Rolando Casumpang, Trax Technologies Director Rolando Casumpang agreed, saying passion means developers are committed to working on their projects and have a capacity to learn.

JP Palpallatoc, Accenture digital lead in the Philippines and a developer for 28 years, said emotional quotient (EQ) is a big plus. “If they face a problematic situation, I want them to persevere’’, he said.

Other highlights of the event include reverse-pitching sessions, coding labs, technical workshops and product presentations about Google’s newest products.

‘’This year’s DevFest focuses on entrepreneurship, on start-ups, on small and medium enterprises to go digital. So the goal is really in digital transformation.’’ Shad Roy dela Cruz, Community Leader of GDG Cebu, said.

He said there are a lot of free technologies that entrepreneurs can use in order to digitize their business processes.

Read Next
Golden Prince turns 4-star on its 11th year