Fairies brides in black and hand-knit dolls take the runway in Dubai for the fifth Arab Fashion Week, a five-day affair (November 15-19)focused on instantly available “ready couture” and pre-collections.

At the opening shows, ball gowns and evening gowns appeared in full force, with Lebanese designer Saher Dia show-casing a collection inspired by old Hollywood—including a metallic-fringed dress that appeared to be a modern-day tribute to Ginger Rogers.

And in a city that has become a metaphorfor luxury, Filipino designer Furne One of Dubai’s Amato Couture, turned his modelsinto fairies living the high life.

“This collection is inspired by fairies—sea fairies, all kinds of fairies, because as a child I believed in fairies,” Furne told AFP backstage.

His collection did not disappoint.

The celebrity favorite, who has dressed Beyonce, Katy Perry and Heidi Klum amongothers, sent more than 20 models down the runway in holographic and pearl headpieces, their arms stained with green duochrome glitter, as if Tinkerbell had gone fora swim.

Embroidered or beaded, gowns in muted blues, blushes and beiges were paired with voile capes and purses made from seashells ina collection that was still wearable for the Dubai crowd. 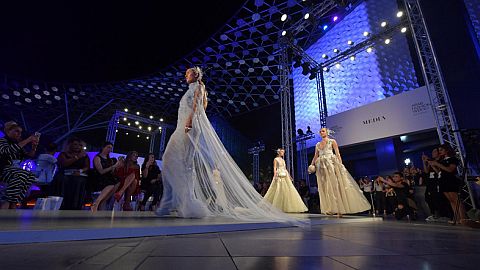 Models present creations by Amato during the Arab Fashion Week in the United Arab Emirate of Dubai on November 15, 2017. / AFP PHOTO / GIUSEPPE CACACE

“For me, Arabs are very creative,” One said.

Arab Fashion Week’s spring/summer 2018 season strikes a markedly different tone from the previous fall/winter season, which had a heavier focus on unisex and menswear lines.

Arab Fashion Week, held twice a year, showcases only see-now-buy-now collections and pre-collections, as opposed to the traditional haute-couture model in which designs are delivered only months after they are ordered.