BTr eyes more than P8B from investors in Cebu 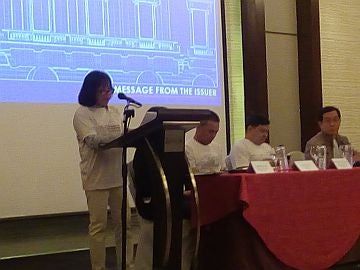 The Bureau of the Treasury (BTr) hopes to raise more than P8 billion in Cebu as it expects more Cebuanos to invest in the government-issued bonds following the strong local appetite during its bond offering last March.

“What we’re seeing is there is still ample liquidity in the system right now. There are OFWs (overseas Filipino workers) bringing in money. Individuals are very liquid. Banks, institutional investors have a lot of liquidity as they have a lot of deposits so they have to place it somewhere which can earn higher yields for them,” De Leon told reporters on the sideline of the Cebu road show for the 20th RTB offering on Wednesday.

Liquidity is the term used to describe how easy it is to convert assets to cash. The most liquid asset, and what everything else is compared to, is cash primarily because it can always be used easily and immediately.

When an investor buys RTBs, they lend their money to the government which the latter will pay back with interest upon a specified period of time.

The BTr said RTBs have become a stable platform in the government’s financing program, especially with plans to ramp up infrastructure spending under the “Build, Build, Build” initiative.

Offering RTBs to the public is one way for the government to develop the capital market by expanding the base of government securities, the BTr had said.

Last Monday, the BTr issued P130 billion in RTBs at a coupon of 4.625 percent, with more expected to be sold in minimum denominations of P5,000 to small investors until November 29.

De Leon said they were compelled to introduce the 20th tranche this year as they saw there was a very significant unmet demand from the last time they issued RTBs.

“It is also fortuitous that we are approaching December and people are very liquid,” she said.

While the BTr is primarily targeting institutional investors such as banks, they are moving to the next level to generate more from individuals and retail investors.

At the rate-setting auction for the issuance last Monday, the Treasury said there was “tremendous market demand” for the five-year IOUs as tenders for the initial P30-billion offering reached a total of P191.8 billion.

The treasurer said there is now more awareness on investing, not just on savings, adding that people are getting into the habit of investment.

“Government issuances are low-risk. The only risk is the diminution of the face value, but that is far off. Even if you sell it on the secondary market for a lower price, you would have already generated more than the face value you invested or you can wait for the RTB to mature after five years,” she explained.

She said Filipinos want to play it safe and to make sure the hard-earned money they invested will return to them at the specified time.

“They know we will really honor our obligation. Legally, we don’t have constraints to pay. Come the date of the maturity, we will be able to honor that obligation,” De Leon said.

About P712 billion or 80 percent of the finance budget for next year will come from the domestic capital market, she added.

De Leon said they would need to have many good platforms to generate that amount, and RTBs are one of those that have been able to bring a lot of inflows for the government.