PROFESSIONAL KILLERS DID IT? 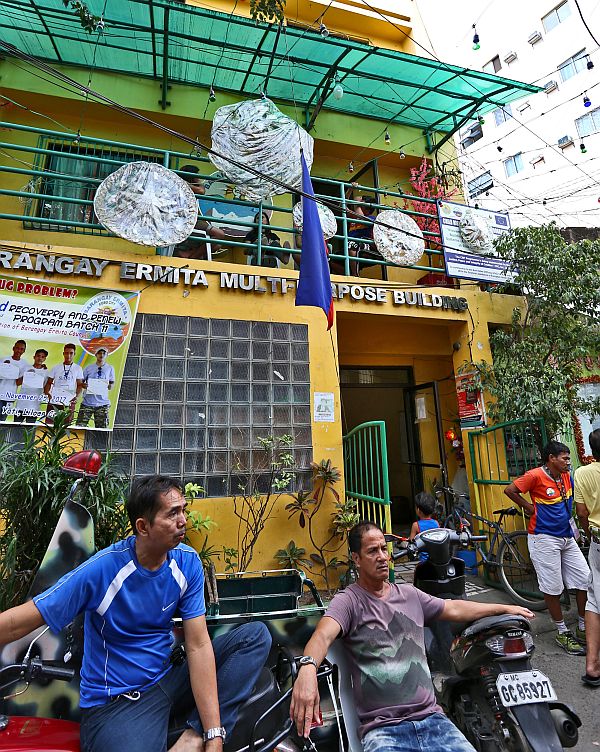 SUPPORTERS MOURN. Supporters of slain Ermita Barangay Captain Felicisimo “Imok” Rupinta and employees of the Ermita barangay hall mourn the death of a leader by flying the flag at the barangay hall at half-staff in this photo taken on November 24, 2017, a day after the Cebu City village chief was ambushed and killed in Liloan town.
(CDN PHOTO/JUNJIE MENDOZA)

A special investigation task group (SITG) was formed to solve the ambush-killing of Ermita Barangay Captain Felicisimo “Imok” Rupinta in Liloan town in northern Cebu on Thursday night, amid initial information indicating it was a hit job by professional killers.

Senior Supt. Jonathan Cabal, RID-7 chief, said the SITG will be composed of policemen from the Regional Special Operations Group (RSOG); the cities of Cebu, Mandaue and Lapu-Lapu; and from Lilo-an town, where the incident happened.

“The regional director is on top of the situation and has ordered us to solve the case immediately considering the fact that an official was killed,” Cabal said Friday.

This developed as the Barug Team Rama, the party to which Rupinta belonged, yesterday announced a P300,000 reward for any information that could lead authorities to Rupinta’s assailants.

Initial investigation conducted by the Scene of the Crime Operatives (Soco) of PRO-7 indicated that the killing was the handiwork of professional killers.

PO2 Ryl Pangutan of Soco-7 said that based on the shots fired at the back and side window of the car of Rupinta, it showed that the suspects were sharp shooters.

This, he said, showed it was possible that the two gunmen were hired killers.

Cabal said they were looking into all possible motives in the killing of Rupinta, including his controversial campaigns against illegal drugs and the illegal vendors in his barangay, which has been labeled as a drug hot spot in Cebu City.

“It could be because of his work as a barangay captain, or personal. We are also not disregarding the possibility of politics,” Cabal said. “We cannot leave stone unturned and deny other probable motives. So lahat ng anggulo tinitingnan (So all possible angles are being looked into).”

Rupinta, who was driving his Isuzu D-Max pickup with his common-law wife Jocelyn Mendoza on the front seat, was returning home to a subdivision in Liloan on Thursday night and was about 15 meters from his house when the two men, riding in separate motorcycles, drove past him and rained bullets on him.

Supt. Melbert Glade Esguerra, Liloan Police Station chief, said their initial investigation showed that Rupinta drove through the Cansaga Bridge and had just turned a corner in Sitio Capulay in Barangay Yati around 7:55 p.m. on Thursday when they were waylaid.

Esguerra said Mendoza had told investigators that it was while crossing the Cansaga Bridge when they noticed they were being tailed by two motorcycles. But before they could react, the two men drove to the driver’s side and fired several shots at Rupinta.

Rupinta took two bullets on his forehead, one on his neck and another on his shoulder. Mendoza sustained gunshot wounds on her hands.

According to Pangutan, the pickup went wayward after Rupinta was shot. It stopped only when Mendoza pulled the hand break. The pickup then hit a tree before it careened down into a grass field in Sitio Simborio of the barangay, 155 meters from where Rupinta was ambushed.

Based on the accounts of some witnesses, Esguerra said there were four people tailing Rupinta who were riding in two motorcycles. But according to Mendoza, there were only two suspects in separate motorcycles.

Esguerra said they were looking into the CCTV (closed-circuit television) footage of nearby establishments to address this inconsistency.

Cebu City Councilor Joel Garganera, on the other hand, asked other officials to refrain from posting unverified tips and information on Facebook regarding the murder of Rupinta.

Garganera, who was among those who immediately went to the crime scene in Liloan town on Thursday night, was referring to posts on Facebook about a witness account that there were four assailants wearing full-faced helmets during the incident.

This account contradicted the firsthand statements of Rupinta’s common-law wife Jocelyn Mendoza that there were only two assailants who were not wearing any protective gear during the ambush.

“Dragnet operation now ongoing to find the murderers of Captain Rupinta. All stations including Mandaue, Lapu Lapu, and everything between Cebu City and Liloan involved,” read a portion of the post, which also carried the full text of the witness account as well as contact numbers where people can report information about those in the account.

But this didn’t sit well with Garganera.

“I’m just so pissed off with these people trying to muddle the issue. Just leave it to the professionals, leave the investigation to the police,” he said.

He noted that Cebu City Councilor Dave Tumulak, who is the deputy mayor on police matters, also talked about the so-called “witness account.”

Sought for comment, Tumulak said he got the information from Esguerra, the police chief of Liloan town in northern Cebu where the incident happened.

Garganera said he was able to talk to Esguerra who told him that the “witness account” was an unverified information. Esguerra just disseminated the information to neighboring police and officials in order to commence blocking operations to try and catch the assailants, said Garganera.

He said posts about this witness account claiming there were four assailants were giving the police an entirely different lead from what was provided by Mendoza.

“It was posted by Tommy on his Facebook. For me, it’s very misleading. It doesn’t help the case. He’s just making the job of the investigators harder. Just respect the police,” Garganera said.

“We have to make this investigation nga walay magsamok (without anybody bothering). The bottomline is there is a mastermind behind this. Somebody will gain from the demise of Kap Imok Rupinta. That’s what we’re after for,” he added.

He defended the dissemination of the information, pointing out that since it came from the Liloan police chief, he thought the tip was reliable.

“We should rely on the investigating group, which is the police. They are more knowledgeable than us. We just request the public who have knowledge on the incident that they have to report it to the Liloan Police Station for them to solve the case,” Tumulak said.

Former Cebu City Mayor Michael Rama, an ally of Rupinta who was among the first at the village chief’s wake, described the late barangay captain as a “hero.”

“He is a hero in Barangay Ermita. He is being looked up by the people in the barangay. He is resolved, reliable and committed, and really a loyalist of the principles and advocacies of Barug Team Rama, standing on what he believes,” he added.

He described the killing of Rupinta as “dastardly done” and “condemnable.”

Vice Mayor Edgardo Labella, in a press conference yesterday, said they hoped that the P300,000 reward would hopefully encourage those in the know to provide authorities with information that could lead to the whereabouts of Rupinta’s killers.

Labella said the reward money was a collective effort on the part of the Barug members in the City Council.

“The Barug Team Rama will raise the amount, but if they (other councilors allied with BO-PK) are willing to also give their share (it is fine). We will contribute,” he said.

Labella said other barangay officials have also pledged to help. Labella also urged those establishments or areas with CCTVs which captured the incident or the fleeing suspects to help the authorities.

“Not necessarily near the area, possibly captured the motorcycle-riding persons. (It) can give a lead,” he said. Labella said they needed to find out who masterminded Rupinta’s killing and why he was killed.

Mayor Osmeña, meanwhile, said he was also surprised by the death of Rupinta. He would have never anticipated the incident to happen, he said.

“You know, people are looking at me because I am an enemy (of Rupinta). I don’t even like to say anything,” he said.

Asked if the city government plans to provide a reward money for information on the killers of Rupinta, Osmeña answered in the negative, saying he would rather let the police do their work on the case.

But the mayor also surmised that Rupinta’s killing looked like it was planned. “They said maybe it is a rage. I cannot say it is a rage. This one is a plot. It involves team work. It was a plot. It narrows down the options,” he said.

When asked who will replace Rupinta, Osmeña said he has no special instructions as of the moment. The major concern, he said, is to see to it that basic services are given to the residents of Barangay Ermita. “There is a government procedure for that. I am willing to sit down with them (other barangay officials of Ermita),” he said.

Read Next
Imok replacement to consult DILG on barangay matters