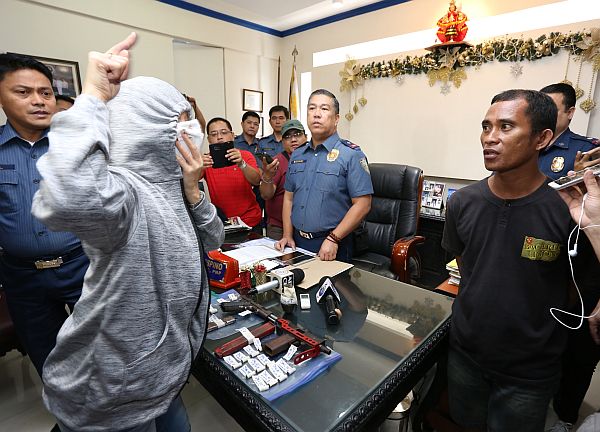 Police hunting for three more suspects, including the mastermind

Barely 24 hours after Ermita Barangay Captain Felicisimo “Imok” Rupinta was ambushed and killed in Barangay Tayud, Liloan town, his suspected assailant fell into the hands of the police.

Jimmy Largo, 41, was arrested by the Police Regional Office in Central Visayas (PRO-7) past 8 p.m. on Friday at the Carbon Public Market.
Police regional director Chief Supt. Jose Mario Espino said Largo was allegedly the gunman in the shooting to death of Rupinta last Thursday, at around 8:30 p.m.

Largo was positively identified by Rupinta’s common-law wife, Jocelyn Mendoza, as the one who pulled the trigger and killed the village chief last Thursday. She was with Rupinta in the car when it was sprayed with bullets by four armed men on board two motorcycles as they were driving home from Barangay Ermita.

“This only shows that PRO-7 is really on the top of solving this kind of case. Particularly because it involves government officials. We will not leave any stone unturned,” Espino said.

The police regional director said Largo was hired to kill Rupinta and that the case is 90 percent solved already.

Espino also claimed that they already know the motive behind the killing of the village chief.

(It relates to his work as barangay captain of Ermita and his job of cleansing his barangay. With all the incidents that have happened there, many angles have arisen, but we have evidence pointing to one angle that could possibly have triggered his killing.)

However, Espino refused to divulge any more information about the motive, saying that they are still hunting the “mastermind” behind the killing of Rupinta.

“After we had a case conference, we also now identified the mastermind. We are just preparing the affidavit and we will file a case dun sa nag-hire dito kay Largo (against the person who hired Largo),” Espino said.

Espino said that they are still going after three other suspects including the mastermind.

Supt. Reynaldo Magdaluyo of Regional Special Operations Group (RSOG 7) said that someone tipped them off about the whereabouts of Largo.

(We received an information that fit the description of Largo, which was given by Mendoza.)

Magdaluyo said they immediately went to Carbon market and discovered that Largo was carrying a bag and ready to flee.

“He was there. Mmay dala siyang baril kasi nagtatangka na siyang umalis (He was there bringing a firearm, ready to flee),” Magdaluyo said.

The police were able to confiscate a 9mm submachine gun, a .45 caliber pistol, a fragmented hand grenade, two sachets of alleged shabu and a motorcycle which had a defaced plate number.

(We were also able to retrieve the white T-shirt that Rupinta’s wife said was what the assailant wore during the ambush, and the description of the motorcycle which had a broken plate number.)

During the press conference yesterday, Mendoza slapped the face of Largo as she accused him of killing her common-law husband.
“Unsay sala ni Kap ninyo (What did Rupinta do to you)?” she shouted at him.

Mendoza also said that the late village chief knew Largo, the reason why she never expected that Largo would harm Rupinta.

Largo was quiet during the press conference but denied having killed the village chief.

(I was not the one who killed him. I was getting a police clearance the day of the incident.)

Meanwhile, the Cebu City government commended the police for the arrest of Largo.

“In behalf of the Cebu City government, we would like to thank the police force for the speedy solution of the case of Barangay Captain Imok,” said Cebu City Councilor Dave Tumulak.

(With the arrest of Largo, other speculations on the motive of the crime will be disregarded.)

Tumulak said this will end speculations that politics is behind the killing of Rupinta.

“We should entrust the investigation to the police,” Tumulak said.

However, Councilor Joel Garganera said he still thinks that the case is not yet solved.

“Its not the end of the line. They should exhaust everything so there will be no stone left unturned,” Garganera said.

Garganera added that the police should also consider questions like who benefits from killing Rupinta and the circumstances that lead to the arrest of the suspect.

He also said that for him, the case of Rupinta is still “too blurry” as of now.

Meanwhile, both Tumulak and Garganera said they still don’t know who will receive the P300,000 reward.

Tumulak said that they are still going to have a meeting with Espino about it.

Largo was presented to the media during a press conference yesterday at the PRO-7 office.

Espino said Largo is an ex-convict and a high-value target of Cebu City Police Office and the Philippine Drug Enforcement Agency in Central Visayas (PDEA-7).

“He has also been involved in so many unsolved shooting incidents in Cebu City, as per report of CCPO director Senior Supt. Joel Doria,” Espino said.
Espino claimed that Largo is a “professional hired killer” and belonged to a group.

“Rest assured that some unsolved homicide cases in Cebu City will now be solved because of the arrest of Largo,” Espino said.

Largo is currently detained at the stockade of the Regional Special Operations Group (RSOG-7).

A source told Cebu Daily News that Largo had admitted having been imprisoned for killing someone.

“Bag-o lang na siya nakagawas, two years ago. We are still finding out unsa pa ang mga kaso niya,” the source said, as he requested anonymity due to lack of authority to talk to media.

(He just got out of prison two years ago. We are still looking into what other cases he is facing.)

The source also said that Largo is a distant relative of Jessie Largo, the suspect in the killing of John Ronli Calizar, son of Public Information Agency 7 employee Ferliza Contratista, last August 26.

Jessie Largo was killed in a shootout with policemen in his residence in Sitio Aroma, Barangay Dumlog, Talisay City last October 16 but managed to injure PO3 David Naraja Jr., who sustained a gunshot wound on his cheek. /With a report from Benjie B. Talisic

Read Next
NO MORE ERRORS