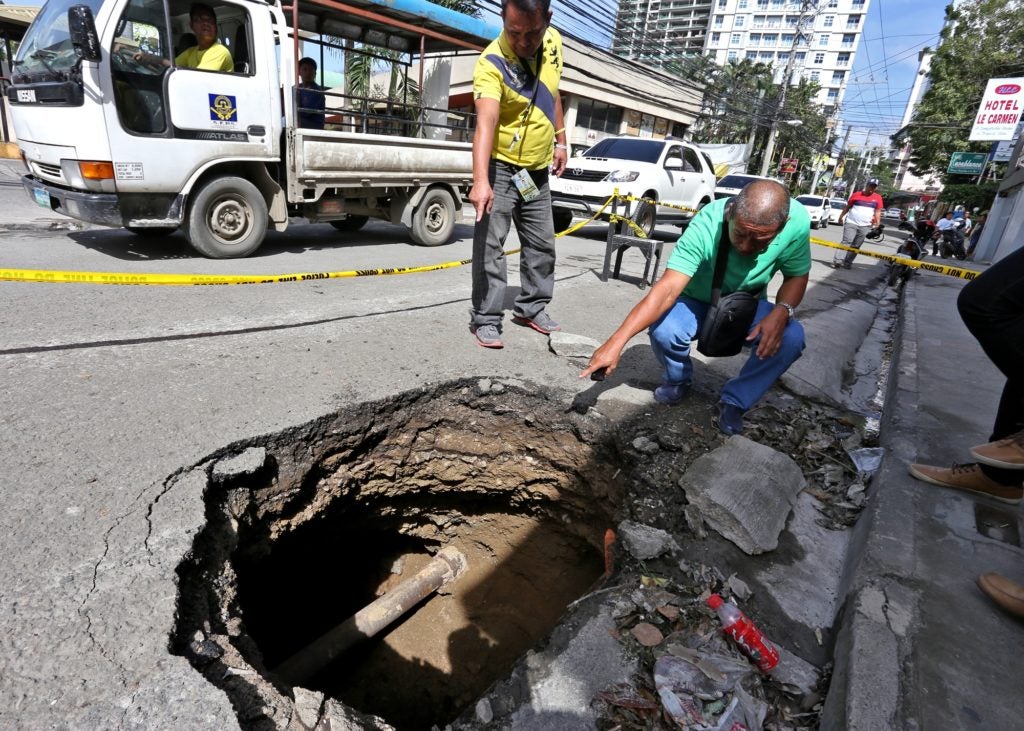 Collapsed portion of Juana Osmeña St. not a sinkhole — MGB-7

Heavy traffic is expected along Juana Osmeña St. as Cebu City’s Department of Engineering and Public Works (DEPW) continues to repair a collapsed portion of the street, which was believed earlier to have been a sinkhole, but was belied by experts to be no more than a portion of the street collapsing because of a lack of a drainage culvert.

This would mean that one lane of Juana Osmeña St. would remain cordoned and closed to motorists for four days, which would cause traffic in the area.

“We expect heavy traffic along this area of Juana Osmeña St. for the road is partially blocked to keep the safety of motorists and pedestrian while rehabilitation is ongoing,” Bañacia said.

The collapse of the street portion on early Tuesday morning created a hole with an opening of one square meter and about two meters deep.
Cebu City’s disaster management personnel, who inspected the area at past 4 a.m. yesterday (Tuesday), were looking into the possibility that the hole created was a sinkhole.

But experts from the Mines and Geosciences Bureau (MGB) 7 ruled it out.

The MGB-7 recommended to cordon the area to avoid any untoward incident from happening.

The MGB-7 also said that heavy equipment and vehicles should also not be allowed to pass by the area.

“I called up the engineering department. They will already mobilize the equipment the soonest possible time. Possibly, they will put a culvert there and repair the drainage system underneath before the surface will be asphalted,” Guardo told reporters.

During yesterday ‘s Cebu City Council session, Guardo passed a resolution urging the DEPW to come up with a recommendation and prepare the necessary program of works and estimates (POWE) for the installation of the culvert in the area and to complete repair works there.

Due to the cordon, only one lane of Juana Osmeña St., the portion across the Century Plaza Hotel, is open for vehicular traffic.

Traffic enforcers have been assigned in the area to manage traffic flow.

Bañacia said they received a report from a security guard regarding the presence of the suspected sinkhole yesterday at 4 a.m.

After cordoning the area, they immediately contacted MGB-7 officials to assess the situation. /With Correspondents Fe Marie Dumaboc and Chris Ligan

Read Next
CLB to tie up with hotels, resorts, remittance firms