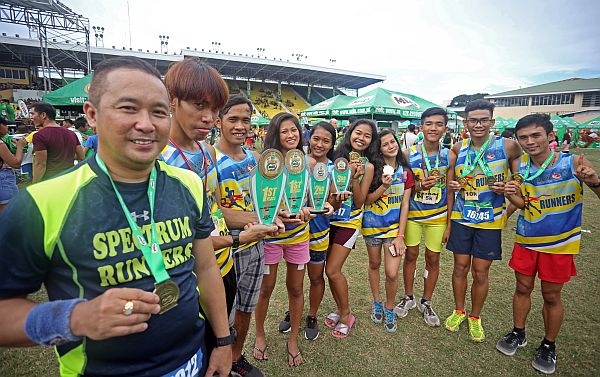 The Spectrum Runners Club is one of the most successful running clubs based in Cebu.

Among its members are top-caliber runners who are consistent winners in different footraces in Cebu and around the country.

The Cebu-based running club was founded in 2013 by running enthusiast Dr. Gerry Mayo. The team is now one of the most vaunted running clubs in the region.

Asked what makes the club successful, Mayo said it’s the attitude that he instills in the group, which is to treat each other as family.

The club was formed through Mayo’s drive to help less fortunate runners. From badminton, Mayo shifted to running on 2012. He discovered that most talented runners in Cebu lack the support that they need to excel.

“There are still a lot of talented runners who doesn’t receive enough help from the government. They possess a lot of potential but they can’t showcase it fully because they lack support,” he said. “Give them proper nutrition, training and gear for sure they will improve. That’s what I did when I started Spectrum Runners Club. Thankfully I am reaping what I sow already because there’s no running event that we joined that we don’t have a podium finish or a title in the bag.”

Among the noted runners in the club include Rafael Pescos, the 23-year-old multi-titled marathoner from Hinigiran, Negros Occidental. He is the back-to-back 42k Filipino category champion in the Cebu City Marathon.

“We are like family in Spectrum. We help each other in training and take care of each other just like what Dr. Gerry does to each member. We are like his own blood,” said Pescos.

Pescos is currently living at Mayo’s residence as well as other members who can’t afford to rent their own houses. He said that Mayo takes care of their registration fees in their races, provides those supplements and gears and even pays tuition fees of his fellow members who are struggling to continue their studies.

Lizane Abella, 29, is another member of the club. She is the reigning champion of the All Women’s Ultra Marathon.

“I am amazed of how united we are in our club. We help each other all the time and we always find time to have fun. We hang out at Dr. Gerry’s house to eat, talk and laugh. Dr. Gerry is like our father,” said Abella, who finished third in the women’s 42k race of last year’s 40th National Milo Marathon grand finals in Iloilo City.

What Mayo is doing isn’t actually easy. Not only is he looking after the Cebu chapter composed of 54 members but also those in Kidapawan, Dapitan, Dumaguete, Davao, and Pagadian, which brings the total number of members to 115. Most of the club’s funds come from his own pocket but he still doesn’t mind it as long as he can help.

“Watching them climbing on the stage as the winning runner, that already makes me proud and extremely happy, it doesn’t matter how much I spent,” said Mayo.

His friends in the United States also donate to the club annually. Some give money while others donate supplements and gears for the members who can’t afford to buy their own.

According to Mayo, this is indeed what the team is all about: running and learning and being together like a family.

Read Next
Mayweather says he ‘carried’ McGregor through 10 rounds