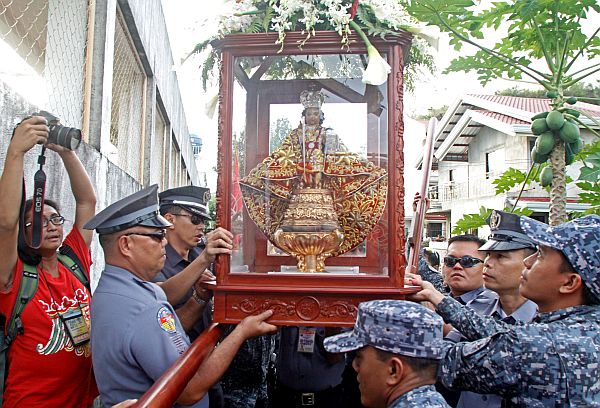 THE image of Sto. Niño will be making the rounds in jails and hospitals before the start of the novena masses next month.

According to Cebu City Councilor Dave Tumulak, he made the request to officials of the Basilica Minore del Sto. Niño in order to give an opportunity to those who could not physically visit the Holy Child in its home to pay their homage.

“We just want to strengthen their faith because there are some inmates that cannot visit the Sto. Niño, they are also part of our devotees. That’s why we requested the basilica to allow the image to visit them,” Tumulak said.

Based on the agreed schedule, the image of the Holy Child will visit the city-owned and managed Operation Second Chance Center (OSCC) where a Holy Mass will be celebrated at 2:30 p.m. on January 9.

It will then transfer to the female dormitory of the Cebu City Jail by 5:30 p.m. where another Holy Mass will be held.

By 8:30 p.m. it will be taken to the male dormitory of the Cebu City Jail for another Holy Mass, as well as a vigil.

On January 10, another Holy Mass will be celebrated at the Cebu City Jail at 1 p.m. before the image will be taken back to the Basilica Minore del Sto. Nino.

Tumulak, who is the head of the executive committee for Sinulog 2018, said that the image would not visit the Cebu Provincial Detention and Rehabilitation Center (CPDRC) next month because they would just have it on April for the Kaplag anniversary.

“This year, the Sto. Niño only visited CPDRC for the Kaplag anniversary. It did not visit the Cebu City Jail. But this is not the first time for the image to visit the city jail since it was already brought there in 2012 and 2013,” he said.

At the same time, the image of the Holy Child will also be visiting the Cebu City Medical Center (CCMC) and the Vicente Sotto Memorial Medical Center (VSMMC) for the first time.

Based on the agreed schedule, the Holy Child will be at the VSMMC on December 17 from 1:30 p.m. until noontime of December 19.
By 1:30 p.m. on December 19, it will depart for the CCMC where it will stay until December 21.

“We also requested the basilica to allow the image to visit the hospitals since we also have a lot of devotees that are hospitalized as well as relatives that have to take care of the patients,” Tumulak said.

Tumulak thanked Fr. Pacifico Nohara Jr., basilica rector and prior, for granting the city’s request to allow the image of Sto. Niño to do the visits.