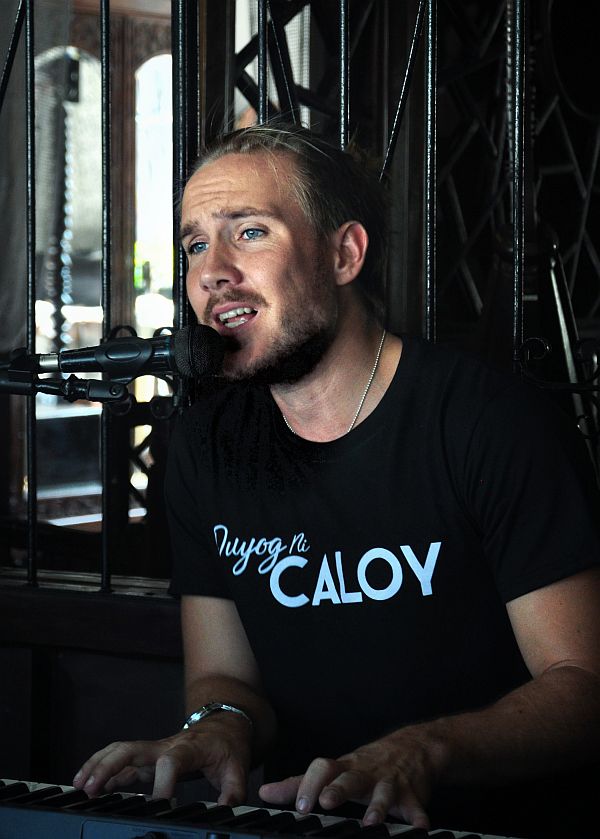 IF YOU haven’t seen him in person, you’d think that this guy singing Bisaya songs is pure-blooded Cebuano.

After almost a year of living in Cebu, Caloy is now being managed by Guru Ads and Marketing Consultancy.

At the media launch billed as “Duyog ni Caloy,” held at Casa Gorordo last December 9, Bruce Cortes Bollozos, Caloy’s manager and managing director for Guru Ads and Marketing Consultancy, said they want Caloy to be known as someone who sings with emotion.

“We select songs that would really fit for him. We don’t want him to sing just any song but songs that capitalize emotions whether celebration, joy or pain,” Bollozos said.

Caloy, for his part, said he wants to write and sing “hugot” songs.

“I love hugot songs. It was hugot songs that started to make me actually attached to Cebuano music,” the singer added.

During the media launching, Caloy performed Wet Slipperz’s “Bisan Pa” and Kurt Fick’s “Hahahasula” while playing the piano.  “I wanna spread Bisaya music all over the world actually,” Caloy said.

Coming from a musically inclined family in Sweden, Caloy had his first piano when he was four years old and started to compose music at the age of 12.

When he reached the age of 16, Caloy played at piano bars in Vasteras, his hometown in Sweden.

At age 21, Caloy started traveling the world for music.

He first performed in a hotel in Turkey.

He then moved and performed in Tenerife, Gran Canaria, Cyprus, Egypt, Thailand, and now in Cebu, Philippines.

He said he loves Cebu because of its culture, the islands and the people.  “I had no idea what to expect but I met so many pure-hearted people who have been helping me.

I have actually more friends here than in Sweden,” he added.  Aside from “Hahahasula,” Caloy also made covers of other popular Cebuano contemporary songs such as “Duyog” which was originally sung by Jewel Villaflores and Jacky Chang’s “Pero Atik Ra.”

On his YouTube channel, he posted his version of KZ Tandingan’s “Mahal ko o Mahal Ako.” Is he now fluent in Bisaya after a  year here in Cebu? “Gamay lang. I understand a bit. I am still learning every day,” he said.

Read Next
A meal for one, no one, and a hundred thousand