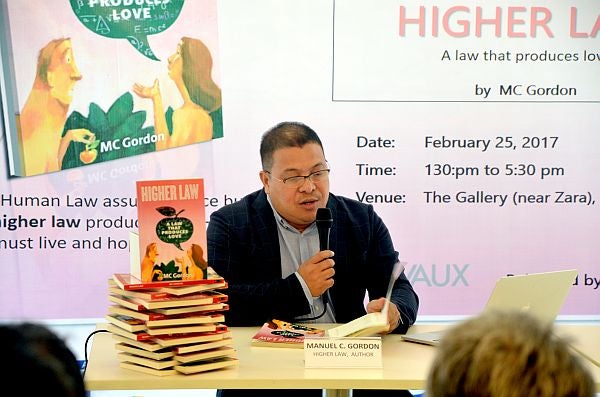 In “Higher Law,” MC Gordon went out of the routine that was taken by a man who has been working for one of the country’s largest telecommunications company in nearly two decades.

With 41 articles covering different virtues, “Higher Law” is a sneak peak of the wisdom from the experiences of a man who started as a young
seminarian but later on found himself as a lawyer and inspirational writer.

The inspiration came from varied experiences but the idea of a higher law came to him as a 14-year-old buy in San Agustin, Surigao del Sur when he saw a souvenir book of the Ateneo De Cagayan’s College of Law in his cousin’s house.

He never forgot those lines.

MC Gordon was a voracious reader at a young age.

There was a scarcity of reading materials for his age so the eight-year-old MC Gordon settled on reading books owned by his grandfather, Lolo Onyo, a town mayor who served for 25 years and whom he described as a frustrated lawyer. Before he even turned 10, he has read books on remedial law, management, human resources and even deeds of sale.

After high school, the young MC Gordon entered St. Peter’s Seminary in Butuan in 1988 for a Bachelor of Arts major in English and Philosophy.

In the seminary, he was features editor for the campus paper and wrote one-act plays. It was in the seminary that he discovered his gift of writing.

But with years of reading law books and the lines on human and higher laws embedded in his mind, MC Gordon realized that he wanted to become
a lawyer.

He left the seminary in 1991 and on the same year, moved to Cebu take up Political Science at the University of San Carlos. He graduated in 1993 and went on to earn his law degree in 1997. He passed the bar exam in 1998.

On his first few years of practice, he was exposed to hundreds of cases ranging from civil, criminal to labor and administrative cases requiring him to appear in court almost every day in a week.

He joined a telecommunications company in 2002 as its senior legal counsel and handled specialized segments such as legal protection on telecom infrastructures, litigation arising from property conflicts, breach of contract, and cases on telecom frauds and network security.

It was in doing his job as a lawyer that MC Gordon realized that “human law is already well documented. The higher law, which calls for each one to love, needs a lot of self introspection.”

MC Gordon started writing the book in 2007. It took him nine years before he let go of the entire manuscript for printing.

“We have several engagements that we forget to examine our inner selves. We are hostaged by technology, by the fast-paced demands of time,” he said of the inner drive that motivated him to write Higher Law.

Writing also became his refuge in times when there were difficult life decisions to make.

“When you speak, you go outward. Writing is about going inward. It goes deeper. It makes you reflect because you have the opportunity to choose your words… the command of the written language will strike your inner being,” he said.

This is the reason why “Higher Law” is more than just a hugot book or a self-help guide.

It is a testimonial of a human being equipped with life experiences as a young reader, former seminarian, a man whose heart was once broken and a proud father.

This book was written by a man with vast experience in human law, who saw the need to explore his inner self and share what he learned beyond what the mind can decipher.

“You may explore the whole world to find a perfect place. But there is only one place you need to travel into—your self,” he said.
Indeed, MC Gordon writes the truth: “Human Law assures justice but a Higher Law produces Love–a law that we must live and hope for.”