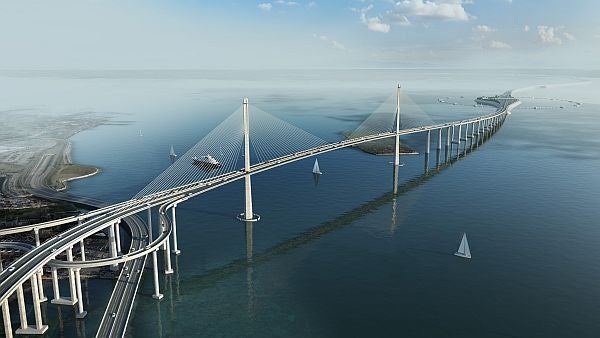 This is an artist’s rendition of the 8.5-kilometer Cebu-Cordova Link Expressway project, which is targeted to be completed in 2020.
CONTRIBUTED PHOTO

The representative of the joint venture that will be constructing the Cebu-Cordova Link Expressway (CCLEX) project, assured that local manpower will also be sourced for the project.

Ruben Camba, the authorized representative of the Cebu Link Joint Venture (CLJV), said the project would need from 800 to 1,000 workers.

“We will have jobs generated on both sides of the bridge. We will have staff from overseas, from DMCI, from Balfour, and also local staff from Cebu and Cordova,” said Camba who is also the director for Southeast Asia of Acciona Construccion SA.

The CLJV has been awarded the design and build contract for the P22.6 billion CCLEX, the third bridge connecting mainland Cebu to Mactan Island.

A ceremonial turnover of the contract from the Cebu-Cordova Link Expressway Corp. (CCLEC) was done last Thursday afternoon.

“The project implementors will hire their own engineers and personnel not only during the construction phase but also during the concession period.

Apart from direct workers to be hired, there will be indirect workers that will be hired by supporting businesses – the suppliers, sub-contractors, and all other parties both in the construction and management of the project,” said Rodrigo Franco, president and CEO of Metro Pacific Tollways Corp. (MPTC).

The CCLEC is a subsidiary of the MPTC.

The CLJV is currently doing the detailed engineering design of the CCLEX which will have two lanes in each direction and will feature a main twin cable-stayed bridge structure, viaduct, toll plaza and causeway.

Camba said they expect the final detailed design to be unveiled by January 8 with actual construction starting slated on the second quarter of 2018.

CCLEC President and General Manager Allan Alfon said that they have already acquired all the necessary permits and documents for the project construction to push through.

These include permits from the Civil Aviation Authority of the Philippines (CAAP) for the height clearance of the structure, as well as from the Cebu Port Authority (CPA) for the bridge’s vertical clearance.

The Department of Public Works and Highways (DPWH) has also released a certificate of no objection to the project.

Alfon explained that they are not anymore required to get a permit from the Philippine Reclamation Authority (PRA) for the embankments needed for the CCLEX causeway, since technically, this is not a reclamation but just a foundation for the causeway to stand.

Six-wheeled vehicles fall under Class C which will pay double the toll fee of P89 while tri-axle vehicles like trailer trucks will have to pay triple the toll fee amount.

The CCLEC will be operating the CCLEX for 35 years with Cebu City and Cordova getting an annual share of one percent each from the revenues of the structure. After 35 years, the CCLEX will be turned over to the two local government units.

The CCLEX is envisioned to help decongest the two existing bridges between Cebu and Mactan Island.

But unlike the two existing bridges, which start in Mandaue City, the CCLEX will start at the South Road Properties (SRP) in Cebu City.

Read Next
PHO to use ovitraps against dengue