New PBA chairman Vargas says league is ‘stronger than ever’ 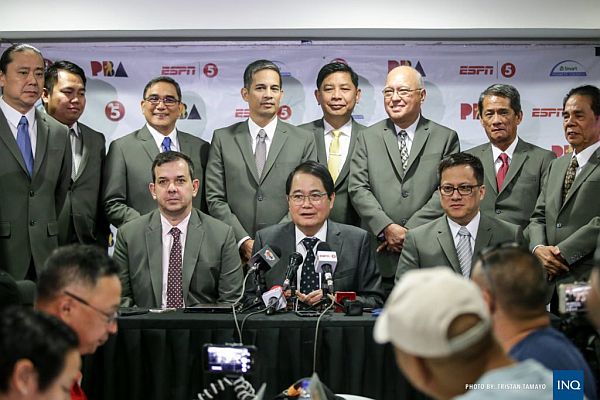 New PBA chairman Ricky Vargas (seated, center) leads a press conference together with the rest of the PBA Board prior to the start of the new season.
inquirer.net

Saying that the PBA board is stronger than ever – and that it will stay that way – new chairman Ricky Vargas said that they “are looking forward to a very fruitful 43rd Season” and at the same time, bared accepting the resignation of commissioner Chito Narvasa.

“We’re back together – stronger than ever,” Vargas said in a no-one-will-ask-questions press conference, minutes before the opening of the new season yesterday afternoon at the Smart Araneta Coliseum.

“And we will stay like that as we begin the healing process of the PBA. This (reconciliation of the board) is for the fans,” he added.

Vargas was the only one who talked, and after thanking fellow board members Alfrancis Chua of Barangay Ginebra, Bobby Rosales of KIA, Al Panlilio of Meralco and Pato Gregorio of Talk ‘N Text for their roles in ending the worst crisis to hit the league in its existence, said that Narvasa tendered his resignation in the morning effective immediately.

Willie Marcial, the special assistant to the commissioner and media bureau chief ever since the time of Noli Eala, was appointed officer in charge as the board starts its search for a new man at the helm.

Prior to the opening, the 12-man board was literally split in two as it argued over Narvasa’s term, an issue that dragged for quite a while and even threatened the postponement of the start of the season.

“We reached out to (Chito) Narvasa and made amends for the things that needed to be clarified,” Vargas explained. “We worked out on his personal hurts in the process and this morning, he submitted his resignation effective today.”

The board was split in factions of seven and five, with the bigger group not wanting to extend Narvasa’s watch and the smaller bloc sticking by the commissioner.

There was not a controversy that big in the league’s first 42 years as the issue disrupted the annual planning session of the board in Los Angeles and made the five-day working trip a sightseeing tour last month.

The brouhaha told, as the season opened before a very lean crowd, a far departure from the success the league enjoyed near the end of the last season when Barangay Ginebra won the Governors’ Cup before record crowds at the Philippine Arena in Bocaue, Bulacan.

“I would just like to thank the people who made us stronger than ever,” Vargas said as he made special mention of Chua, “who was always there looking for solutions.”

Narvasa, thus, steps down after two years of calling the shots, and while he may have been the central figure in the biggest issue that rocked the league, he can lay claim to engineering that blockbuster championship series between the Gin Kings and the Meralco Bolts.

That title series played its last three games at the cavernous Arena where more than 54,000 fans watched Game 7 and close to 150,000 saw the last three outings – all all-time records.

Vargas is back as league chairman after seven years. The last time Vargas assumed the post as league chairman was back in the 2006-07 season.
Aside from Vargas, Alaska governor Dickie Bachmann has been elected as the vice chairman, while Phoenix governor Raymond Zorrilla is the new treasurer for the 43rd season.