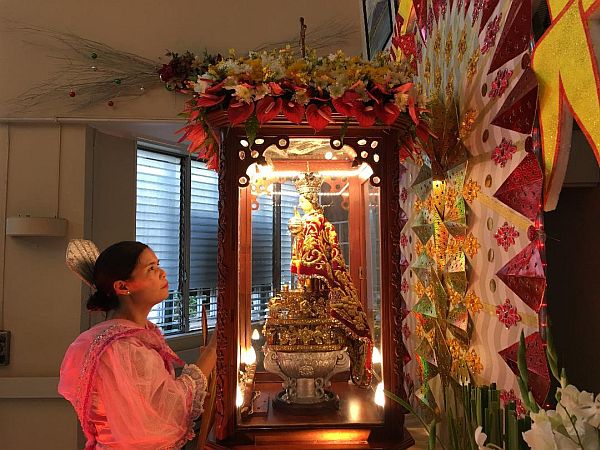 Grace Quitalig, 46, pays her respects to the image of Sr. Sto. Niño, which was brought to the Vicente Sotto Memorial Medical Center (VSMMC) where she works as a nurse for the past 24 years, on Sunday afternoon.
(CDN Photo/ Jose Santino Bunachita).

CLAD in a pink Filipiniana dress, 46-year-old Grace Quitalig danced her heart out to the beat of the Sinulog as they welcomed the arrival of the image of Sr. Sto. Niño at the Vicente Sotto Memorial Medical Center (VSMMC) yesterday afternoon.

She was with 11 other personnel of the VSMMC who danced the Sinulog.

Through a caravan, the image of Sr. Sto. Niño was brought from the Basilica Minore del Sto. Niño all the way to VSMMC past 12 noon yesterday.

“Instead of us visiting the basilica, it was Sr. Sto. Niño who visited us here and it’s also on my birthday. I am very happy. I am also a devotee and I have my own intentions that I wish to ask Sr. Sto. Niño,” she told Cebu Daily News.

Quitalig said she asked for guidance and help from Sr. Sto. Niño since her 19-year-old child will be undergoing some laboratory tests for a suspected illness.

After working as nurse at the VSMMC for 24 years and being a devotee of Sto. Niño, Quitalig said she has witnessed miracles by the Holy Child. She recalled a time when she went to the basilica to ask for Sto. Niño’s help for the child of her friend who was at a critical condition due to dengue four years ago.

“I heard Mass at the basilica. I told Sto. Niño that I had nothing to ask for myself and just wanted to thank him for the blessings. But, I just had to ask him for help for my friend’s child. Then when the priest introduced himself, his name was the same as that of the childs father. I thought it was a sign. Then later on, the child’s condition improved,” she recalled.

Together with hundreds of employees, patients and relatives, Quitalig paid her respects to the image of Sto. Niño whose image was brought to the VSMMC.

The image of the Holy Child will stay at the Outpatient Department of the hospital until Tuesday when a Mass will be held at 12 noon. Afterwards, it will be brought to the Cebu City Medical Center (CCMC) where it will stay for another three days and two nights.

Today, another Mass will be celebrated at 4 p.m. to be followed by a procession of the image in the hospital’s different wards to visit the patients in their beds.

On Tuesday, the image will continue its procession to the rest of the wards before the Mass and the sendoff.

Cebu City Councilor Dave Tumulak, chairperson of the executive committee for Sinulog 2018, had requested that the image of the Sr. Sto. Niño be brought to the VSMMC and the CCMC so that patients and their relatives would have a chance to offer a prayer even if they couldn’t go to the basilica.

Fr. Pacifico “Jun” Nohara Jr., OSA, rector of the Basilica Minore del Sto. Niño said they immediately granted the request. This is the first time that the image of the Holy Child is being brought to hospitals.

“For me, this is an opportunity for sick people. Even Christ who healed the sick said ‘your faith will heal you.’ So with this, at least the people will feel the presence of the Lord through Sto. Niño and that they would believe that their faith will heal them,” he told CDN.

The hospital’s outpatient department will be open 24 hours for devotees to visit the image of Sto. Niño in the VSMMC.

Aside from the hospitals, the image of Sto. Niño will also be brought to the Cebu City Jail and the Operation Second Chance Center (OSCC) next month.

Based on the approved schedule, the image will be at the city-owned and managed OSCC on January 9 where a Mass will be held at 2:30 pm.

It will then be brought to the female dormitory of the Cebu City Jail at 5:30 p.m. on the same day for another Mass.

At 8:30 p.m., it will be taken to the male dormitory of the city jail where another Mass will be held as well as a vigil.

On January 10, another Mass will be held at the male dorm at 1 pm before the image will be brought back to the Basilica Minore del Sto. Niño.