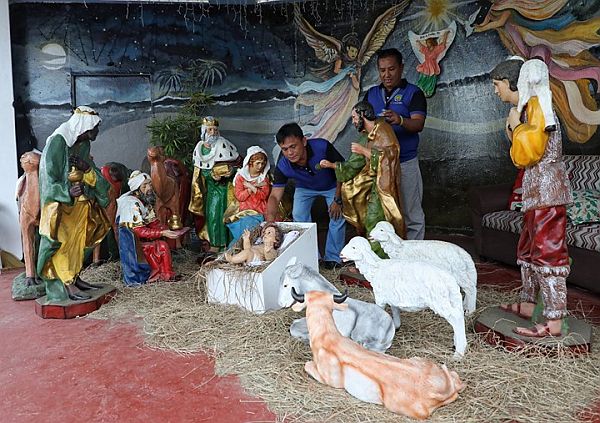 BERNARD Sarraza has been a photographer for 38 years.

Sarraza, a native of Sitio Asinan, Barangay Mantuyong in Mandaue City, witnessed how the Mandaue City Plaza transformed from a plain meeting point on weekends to an anticipated Christmas attraction every December. “This area has changed in the last four decades. The city government has invested in making this beautiful and pleasing to the people of Mandaue and the visitors,” the 73-year-old photographer said in Visayan.

In previous years, a 15-meter tall Christmas tree and the House of Santa were the highlighted attractions in the plaza.

This year’s attraction is a life-size belen (nativity scene) placed on the Rizal-Bonifacio stage.

The belen is set on a handpainted backdrop of three angels, the star of Bethlehem and a dawn landscape.

Engineer Marivic Cabigas, head of the Department of General Services (DGS), said the belen was purchased last year from a store located near the Cebu Metropolitan Cathedral for P120,000.

“We emphasized the belen because the birth of Jesus Christ is the reason why we celebrate Christmas. We saw the need for the younger generation to realize this and not just focus on the commercialized aspect of the celebration,” said Cabigas.

Cabigas, a government employee for 34 years, said the Mandaue City government spent P859,000 for the lights and decor in the plaza.

The amount also covers the materials used in beautifying the plaza including paint and other decorative materials.

Every December, the Mandaue City Plaza transforms into a wonderland of lights and decor.

Cabigas said her team led the execution of the Christmas decorations in the plaza.

The DGS team coordinates with city officials and other employees for the Christmas theme.

By October, DGS staff worked on putting together the preliminary works and decor. In November, most of the materials were ready for display.

A carriage is located across the National Shrine of Saint Joseph where people like to pose and take pictures.

Cabigas said only the light bulbs are new every year but most of the materials are decorations and accents used from the previous years.

“We emphasize the new Mandaue, the center of transformation so we do not waste materials. We take care of what we use every year so we can still use them in the following years,” said Cabigas.

Joy Ceniza brought along her two children, Alyssa and John Mark, on December 17, a Sunday, to experience the beautiful transformation of the plaza.

Ceniza said they first saw the beautiful changes in the plaza in 2012 when current Cebu 6th district Rep. Jonas Cortes was the mayor.

Cabigas said 50 personnel including DGS staff and employees from the Clean and Green office put together this year’s belen and Christmas decorations.

“We emphasize the transformation of a new Mandaue, which can be felt by their experience in public places,” she said.

At 6:00 p.m. on December 17, DGS staff Mamerlita Gungob and May Arcenal were assigned to watch over the belen.

The nativity scene figures are made of fiber glass.

Arcenal said they have to make sure that curious guests will not ride on the donkey or push the camels.

“They can have their pictures taken with the figures, but we want to make sure that they respect them as this is a sacred scene,” said Arcenal.

The belen is open every day for 24 hours.

The belen and the decorations are up until January 20, 2018.