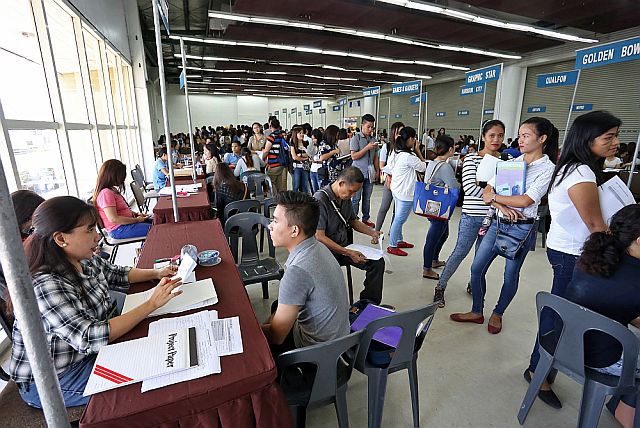 Applicants try their luck at a job fair in May 2017 at the SM Cebu mall. Cebu’s economy continues to grow and with it an increase in employment in the province and the region.
CDN FILE PHOTO

Central Visayas registered a higher employment rate in October this year compared to the same period in 2016 on the back of a booming regional economy and burgeoning tourism sector.

Cyril Ticao, regional director of the Department of Labor and Employment in Central Visayas (DOLE-7), said these were among the reasons behind the increase in employment in the region despite the slight drop in the employment rate across the whole country.

“The economic boom really helped. Another thing is the construction of resorts, hotels, and restaurants as a response to the region’s vibrant tourism industry,” he told Cebu Daily News in a phone interview.

Central Visayas posted a robust growth of 8.8 percent in 2016, posting a gross regional domestic product (GRDP) of P525 billion, sustaining its position as among the fastest growing regions in the country.

According to the results of the October 2017 Labor Force Survey (LFS) conducted by the Philippine Statistics Authority (PSA), the employment rate in the country was at 95 percent, lower than the 95.3 percent logged in the same month last year.

This translates to an unemployment rate of 5 percent, up from 4.7 percent in 2016.

Out of the region’s workforce of 5.21 million, close to 5 million are employed while the rest do not have jobs.

In an earlier statement, the National Economic and Development Authority (NEDA) identified tourism, information technology, business process outsourcing, manufacturing, and construction as the major growth drivers of the region moving toward 2022.

Metro Cebu’s BPO workforce alone already employs 140,000, not only from Cebu but also from neighboring provinces and regions.

Central Visayas welcomed 5.95 million tourists in 2016, up by 29.17 percent from 4.6 million in 2015, encouraging more developers to put up more hotels and resorts in the region whose construction generated thousands of jobs for the community.

For Cebu Chamber of Commerce and Industry (CCCI) president Melanie Ng, tourism is a “magnet for economic development.”

“When there are tourists, there will be demand for services and facilities, which will require manpower as well, so there will be more opportunities for locals to be employed,” she said in a separate interview.

The industry and service sectors, which generate 75.1 percent of jobs in the country, increased by 5.2 percent and 4 percent, respectively.

NEDA Central Visayas (Neda-7) Director Efren Carreon said the region is poised to be a major growth center in the country over the next six years.

Carreon noted that the region had the highest growth momentum among all regions in the last regional plan period of 2011-2016, with an average GRDP growth rate of 7.5 percent within the six-year period, higher than the National Capital Region’s.

Carreon pointed out that more needs to be done to achieve inclusivity, adding that growth strategies need to have spatial and sectoral dimensions to ensure this.

In its regional development plan 2017-2022, Neda-7 sees the need to expand economic opportunities in agriculture, among others, through investing in new approaches to food production.

Also seen to propel the growth of the manufacturing sector is the expansion of the region’s industrial estates, economic zones, and IT parks.

To maximize the potential of the region’s tourism industry, NEDA emphasized the urgent need to complete new airport projects and airport upgrades such as the second passenger terminal at the Mactan–Cebu International Airport, new Bohol International Airport, and improvements on the airport on Siquijor island.

By 2022, he said the region aims to reach a GRDP growth rate of 8.3-8.8 percent, reduce poverty incidence among families to 17.6 percent, and cut unemployment rate to 3-4 percent.