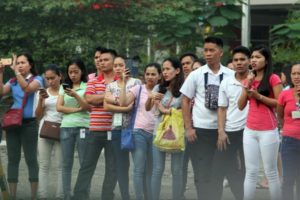 WITH the Metro Ayala Department Store building destroyed, the store management has assured the more than 500 affected employees that they would not be displaced.

Lawyer Vincent Tomaneng, legal officer and spokesperson of Viscal Development Corp. of Metro Gaisano Group, gave his assurance on Monday to the employees affected by the fire at the Metro Ayala.

Tomaneng said that there would be no regular and probationary employees that would be displaced.

“We will take care of them,” Tomaneng said in a text message to Cebu Daily News.

“They will all be absorbed and will continue to receive salary without any deductions for unworked days,” he said in a text message to Cebu Daily News.

He estimated that around 500 metro employees, and six other personnel provided by the independent contractors, will be taken care of.

Tomaneng said they had not yet determine the cost of damage brought by the fire to the six-storey department store.

“Our adjusters have not yet entered the premises to assess the damage,” he said.

He also said that they still had to discuss the plan of reconstructing the damaged store, if they would renovate and restore its old image, or demolish and build a new Metro.

“We cannot decide on that yet, as we have yet to determine the extent of the damage,” he added.

Tomaneng also apologized to the mall’s valued customers for the inconvenience caused by the store fire.

“We apologize for the inconvenience and we appreciate their concern,” he said.

“We will do everything we can to rise again to serve them,” he added.

The Department of Labor and Employment (DOLE-7) has sent inspectors to the fire scene to check if any Occupational Safety and Health Standards (OSHS) lapses were committed.