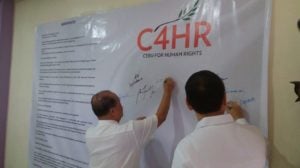 Lawyer Democrito Barcenas (left) led the signing of a manifesto to denounce the series of killings and other human rights abuses during the launching of the Cebu for Human Rights (C4HR) coalition at the Integrated Bar of the Philippines spcial hall in Cebu City. PHOTO by ADOR MAYOL

Fed up with the spate of killings, a group of Cebuanos, many of them lawyers, formed a coalition to monitor and document all human rights abuses while repeatedly appealing to the government to take action and protect its citizens.

Named Cebu For Human Rights (C4HR), the coalition was formally launched on Tuesday with representatives from the academe, students, urban poor groups, the religious sector, and lawyers.

Human rights lawyer Democrito Barcenas, one of the C4HR’s convenors, said Filipinos must not remain mum amid all the killings and other abuses under the administration of President Rodrigo Duterte.

“We gather here in defense of human rights, the constitution, of due process, and our democracy. We must be informed. We cannot be silent anymore amid various forms of injustice and the bloodshed,” he said.

Although only about 60 people attended the launching of C4HR at the Integrated Bar of the Philippines’ social hall in Cebu City, Barcenas said many sectors were represented.

“This is just the start of the journey of a thousand miles. We call everybody to join us. Will we just wait for our loved ones to be killed before we do something? Let us stand up now and continue the crusade to defend human rights and our country,” he added.

Aside from Barcenas, the other convenors of C4HR were lawyers Lourdes Barcenas, Magdalena Lepiten, Myrfi Gonzalez, Vincent Isles, Jay Pujanes, and Fionah Bojos, as well as private individuals Bien Fernandez and Haley Atienza.

Also present during the coalition’s launching were IBP Cebu City chapter President Jose Glenn Capanas and Arvin Odron, the director of the Commission on Human Rights in Central Visayas (CHR-7).

Odron said the CHR-7 is open to a partnership with C4HR in monitoring and investigating human rights abuses in Cebu.

He said the government has the duty to serve and protect its people as well as to value the dignity of all human beings.

Lepiten said they decided to create the coalition after a meeting last December 21 despite the lack of resources, hoping that they can do something to minimize, if not eradicate, the series of human rights abuses under the Duterte administration.

“As many say, it’s more dangerous in the Philippines now. There have been admissions by President Duterte that he has something to do with the killings, but agencies of government seem to be deaf and blind to what is going on,” Lepiten said.

Isles, on his part, said every Filipino ought to know that they have the right to life and to equal protection of the laws.

“It’s never part of our culture to kill criminals. It’s not because we are Catholics, Muslims, or nomads, but because as Filipino people, we always believe in human rights. We want the full extent of human rights for each and every Filipino. Now is the time to go back to who we are,” he said.

Before the program ended, the group signed a manifesto on a huge tarpaulin, a part of which read: “There is blood in our hands. While we remain silent, blind and deaf to what is happening, the blood stains our hands, bodies, minds, and souls.”

Based on the records of the Police Regional Office in Central Visayas (PRO-7), at least 188 drug suspects in the region were killed in alleged shootouts with policemen, while 213 others were gunned down by still-unknown assailants since July 1, 2016.